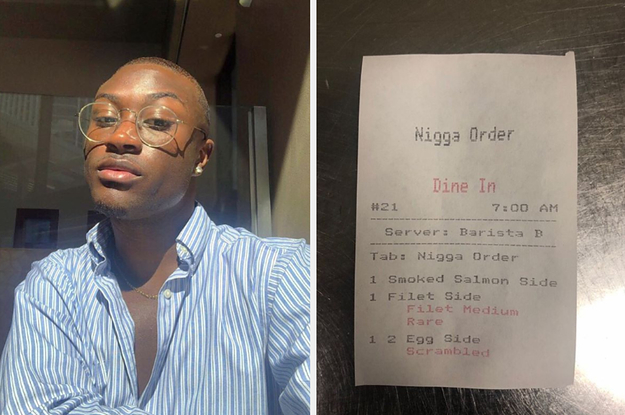 An employee of a Phoenix restaurant who put in a food order for a black server using the N-word has been fired, the restaurant’s operators announced Thursday.

The decision by the Breakfast Club to terminate the employee was a reversal from earlier this week, when managers defended keeping the employee on staff.

“We came to a realization: the only way to ensure that Breakfast Club has a zero tolerance against discrimination is to take strong public action when discrimination occurs,” CEO Kyle Shivers and chief operating officer Ernie Vega announced in an Instagram post. “Today, we terminated the employee who, in what he described as a joke, substituted a racial slur for his own name when putting in his own lunch order.”

The announcement came more than a month after the offending order was placed and two days after BuzzFeed News reported on the Oct. 22 incident at the Breakfast Club.

Rakevion White, a 21-year-old student at Arizona State University, told BuzzFeed News he received the food order and brought it to management, who he said brushed it off as a joke.

“They’re making light of the situation and pretty much allowing it to go on,” White said, adding he believed the ticket was directed at him since he was the only one working the area of the restaurant at the time.

White posted about the incident Tuesday on his Instagram account, weeks after he said he felt managers had ignored the issue. Instead, he said, he noticed his hours had been reduced and that he had worked as a server only once, affecting the extra money he could make from tips.

After White’s post, the Breakfast Club initially took down their social media accounts. Once they were restored, a statement was posted that said the incident had “disturbed our leadership team to the core.”

The restaurant also stated it had decided not to fire the employee at the time “based on the depth of his remorse, the sincerity of his apology to everyone he offended and his five-year prior record of treating his fellow employees with respect.”

But the restaurant’s managers reversed course on Thursday after, according to the statement, they met with leaders in the local African American community, an experience they called “eye-opening.”

White later told BuzzFeed News he learned the employee had been fired hours after it occurred, and has not heard from management about their decision to reverse course.

“Today’s firing should have happened the day that this initially happened, or the day I talked to management,” he said. “It should have been taken more seriously at the moment.”

White said two employees had been involved with the food order, and he did not know which one was fired from the restaurant.

Despite the slur, White continues work for the Breakfast Club because he is paying his way through college.

“I still feel uncomfortable ’til this day, but I am a college student and putting myself through school,” he said.

In their statement Thursday, the restaurant operators called the order “deeply hurtful.”

“As we said previously, this was not a joke, even if the slur was not directed at a guest or a fellow worker,” Shivers and Vega said. “It was crude, insensitive and deeply hurtful. It was an extremely serious breach of how we expect Breakfast Club employees to treat each other and our guests.”

And while they believed in the “sincerity of this young man’s remorse,” they had to consider the restaurant’s more than 100 employees in their decision.

“We will do everything in our power to ensure such an incident never happens again,” they said.