“Their parents haven’t worked and they’ve had no engagement with work before.”

The charity is about to celebrate the 10th anniversary of its social enterprise, hatted restaurant Charcoal Lane, housed on the site of a former Aboriginal Health Service in Melbourne’s inner-city Fitzroy.

More than 250 young Indigenous workers have progressed through the restauraunt’s training program and some graduates are now working full-time in Australia’s top eateries.

“It’s changed my life in many ways,” said Shania Austin, a Yorta Yorta and Gunditjmara woman form Melbourne who has been at Charcoal Lane for two years.

“I was really shy and working with native ingredients got me through, because I kind of have my culture here to back me up.”

“I have a strong connection to Gertrude Street and Fitzroy. And my family was here, so I am proud to be [working] in this building.” The restaurant also provides support a range of personal issues some of its trainees may experience, with social workers on hand.

Melbourne is currently experiencing a housing crisis and has one of Australia’s highest rate of Indigenous homelessness.

“Some young people who apply here are coming out of home care and have no connection to culture,” Crellin said.

“Yet every young person I’ve met is yearning for that knowledge”.

“Working in a restaurant that is so highly regarded gives our students a lift, plus we put culture at the forefront of what we do.”

The restaurant’s executive chef Greg Hampton is a horticulturalist with a passion for Indigenous foods.

“We push young people to ignite a spark and promote a connection between food and culture,” he said.

“By doing that, we’re changing young people’s lives and putting them on a path they can be proud of, to appreciate their heritage and how good their foods are, and what Aboriginal culture has to offer in the world.” The Duke and Duchess of Sussex are among a growing list of notable guests to visit Charcoal Lane. They dined on wild Barramundi and boar, with native Bunya nuts and pepper berries, during their Australian visit in 2018.

“Harry was really getting into it, and she was quite reserved in the way she was eating. But he was having a really, really good time so it was great,” Hampton said.

“Megan was the foodie, and she knew a lot about what was on the plate,” Crellin said.

“She engaged with Greg and it was really beautiful for our students and staff. It’s a recognition that we’re doing something right.” Restaurant bookings have gone through the roof since the royal visit, according to the charity.

Graduate Shania says she is proud to showcase bush foods to visitors and particularly international guests.

“I love it because not many people overseas know that we’re [Australia’s] first people, and we’ve been here for thousands of years.”

“They are often shocked to learn we’re the oldest living culture in the world and we have this restaurant here, and when they eat, it’s good” 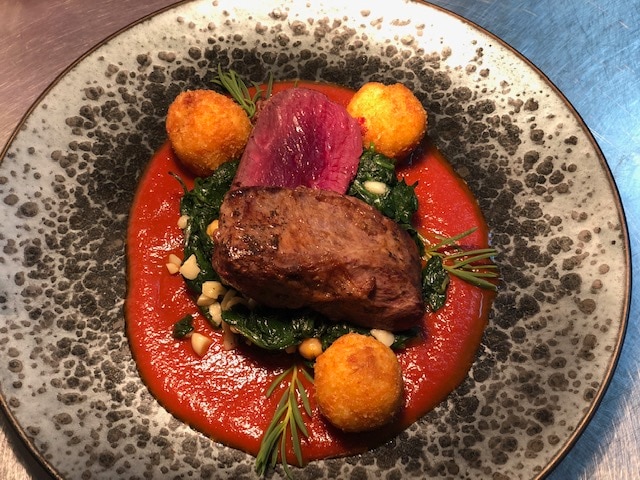 The restaurant is stocked with native foods from across Victoria.

“We source bush foods from small farmers, and many of them family-owned businesses,” chef Hampton said.

“We also source ethical foods locally from Wiradjuri tribal council and we hope this is something we can replicate across the country.”

NAIDOC Week is marked 7-14 July and celebrates the history, culture and achievements of Aboriginal and Torres Strait Islander peoples. For more stories on NAIDOC celebrations around the country go to sbs.com.au/nitv/naidoc