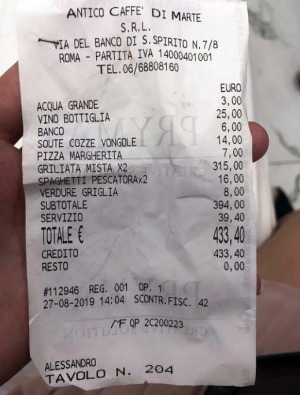 A Japanese couple who blasted a restaurant in Rome for charging them nearly $700 (429.80 euros or $696) for two plates of spaghetti with fish and two glasses of water has set off a firestorm on social media.

That’s a lot of marinara.

After the pair uploaded a picture of the Antico Caffè di Marte bill to TripAdvisor and Twitter — which shows how they were charged an extra $64 (reportedly as a compulsory service charge) — other patrons joined in on the trend of shaming the eatery for its fuzzy math.

Owner Giacomo Jin is not taking the criticism lightly, maintaining the pricing is not deceptive in a statement published by the Italian newspaper Il Messaggero.

“Everything is written in detail, just look at the prices: €16 [$26] maximum for a spaghetti with seafood,” he said. “To pay that figure, the [Japanese] girls ordered not only spaghetti, but also fish. On the other hand, our fish is fresh: the client picks it at the counter, we weigh it and we cook it.”

He also added that the tip and service fee was not mandatory, which contradicts many of the reviews on TripAdvisor, the American-based travel and restaurant website featuring real-time accounts and reviews generated by customers.

As a result of the feeding frenzy of bad blowback for the restaurant — located near the Castel Sant’Angelo museum in Rome’s city center — Tripadvisor suspended the restaurant’s review page and posted the following statement:

“Due to a recent event that has attracted media attention and has caused an influx of review submissions that do not describe a firsthand experience, we have temporarily suspended publishing new reviews for this listing. If you’ve had a firsthand experience at this property, please check back soon — we’re looking forward to receiving your review!”

See also: The rip-off e-visa scams that are catching out Australians

See also: The rules of tipping in Europe: What travellers need to know

Here’s Another Reason to Be Happy In-N-Out Never Opened in New...