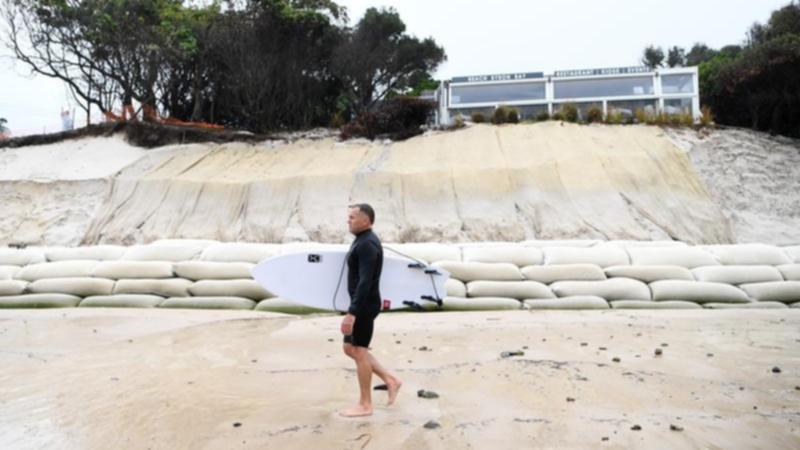 Ben Kirkwell believes he’s “dodged a bullet” after his Byron Bay restaurant narrowly avoided being washed into the Pacific Ocean.

His family and the Fink family co-own the salubrious Beach Byron Bay restaurant, which came close to going under as a mountainous swell smashed into the dunes under it in the early hours of Monday morning.

Mr Kirkwell says a six-layer wall of sandbags installed in November held out, but the easterly swell direction had also helped spare the building in the northern NSW town.

“The waves were whitecapping across the bay and smashing into Belongil and Main Beach and we had big surf crashing over the sandbags at the foot of our restaurant,” he told AAP.

Mr Kirkwell said the sandbags withstood a full stress test, and without them the waves would have gouged out the sand beneath his restaurant and the caravan park next door and washed them away.

“At the end of day we are looking like we might have dodged a bullet so we’re very lucky in that,” he said.

Despite the dramatic moments, he said it had been businesses as usual at the restaurant on Monday.

Mr Kirkwell said they had a particularly brisk morning trade selling coffee to journalists before later offering a full lunch service to 100 diners.

“They were all sitting enjoying their wine and fresh seafood, really oblivious to what was going on,” he said.

Clarke Beach and Main Beach have lost so much sand that they’re covered with water at high tide.

There’s a near sheer drop from the dune beach access paths to the sand with locals saying about four metres of dune and vegetation were washed away during the king tide.

Local man Neil Holland and his wife Erica took a stroll along Clarkes Beach at low tide to inspect the damage on Monday afternoon.

He said the restaurant was lucky, but more sandbags were needed and the rest of the dune system should be reinforced.

“I don’t know what they’re going to do, because we need to stop it (now),” Mr Holland, who has lived in Byron for 47 years, told AAP.

“Because (otherwise) where do they stop it? When it cuts Lawson Street? It really can’t be left to keep going.”

Mr Holland said the erosion was also exposing rock reefs under the sand, making the beach treacherous for swimmers and surfers, especially tourists and visitors who weren’t aware of the danger.

He said he was certain the weather causing the erosions if being caused by man-made climate change.

“It is absolutely, this has been ongoing now for years. It just seems to be exponential, it’s been accelerating,” Mr Holland said.

Mr Kirkwell does not believe the scale of erosion was caused by man-made climate change alone, but a combination of factors.

He said it was an east coast low-pressure system, longshore drift, king tides and easterly swells combining at the same time.

“Who knows, 2020 has been a hell of a year, we could get cyclones or anything still coming in so you never know what’s around the corner.