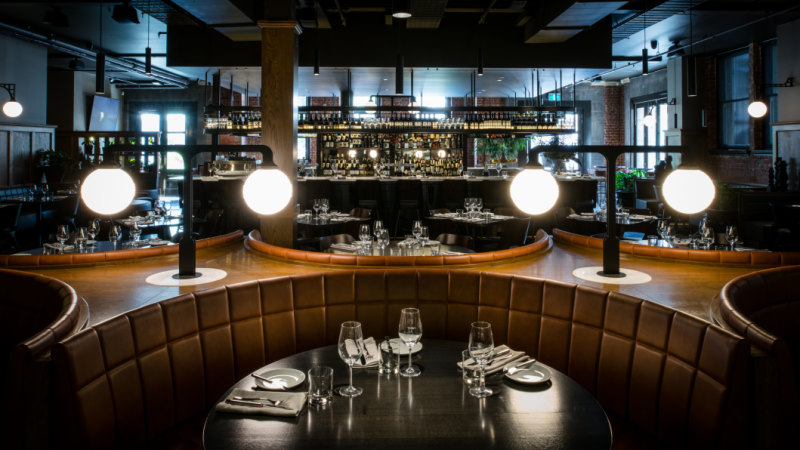 “Liam was keen to create a restaurant where you’d find a great steak, part club, the type you might stumble across in New York,” says Bergman, who was also mindful of the sandstone building’s classic architecture, dating from early 20th century building.

Bergman & Co inherited some of the original features from the post office days, but the previous tenant who ran the place as a schnitzel bar had removed many of these.

“Our brief was to create something more sophisticated, while retaining as much of the building’s original fabric as possible,” says Bergman, who worked closely with her life and business partner Paul Grummisch, trained as an industrial designer, and responsible for delivering everything from the ‘floating’ steel shelves, to the bespoke lighting.

Ganley handed Bergman a number of images from restaurants and bars that inspired him while travelling through New York.

Although these images provided a staring point for the design process, Bergman was mindful of retaining as much of the former fabric as possible to achieve the budget she was given.

Exposed brick walls were retained, as was some of the oak paneling on the walls.

The bar was also kept in the same position, but in this instance the oak was painted a dark olive green to create mood, as were the walls above the oak paneling.

There’s also a band of new floor tiles wrapping around the bar that create a contemporary edge.

As there are two entrances to Angus & Bon, both from Greville Street, one is used to create an informal lounge, concealed behind what’s referred to by Bergman as a ‘wunderkammer’. Instead of artifacts, the new oak cabinet is filled with pot plants and customised ceramic pots and utensils, all hand painted in black ink.

“I wanted to create some intrigue upon arrival, but also a ‘veil’ of privacy for those waiting to be seated, before friends arrive,” says Bergman.

Creating a variety of seating styles at Angus & Bon was also pivotal to the design process.

“People enjoy coming to the same place, but they often want a different experience every time they visit,” says Bergman, who created a more informal seating area at the front of the restaurant, with benches and chairs.

Those looking for a more fine dining experience opt for the ‘clam’ style leather clad seating booth, or the banquette-style seating on either side of the bar.

Bar stools cater for those eating alone or in small groups. The opportunity to see into the kitchen is now also possible, with the former cool room, previously enclosing this area, located to one side and out of view.

“From our experience, people like to have their backs against the wall for security, giving them unimpeded views across spaces,” says Bergman.

As with most of Bergman & Co’s hospitality projects, time and cost is of the essence.

In the case of Angus & Bon, the delivery time was two months and the budget was ‘thinning’ towards the end of the project.

“I often find that’s the time we really think outside the square,” says Bergman, who was looking for additional artefacts to enrich this environment.

One of her team came across a pool table manufacturer who discovered over 50 table legs of varying sizes, including prototypes in a back room, all for the having.

Now painted with black ink by Bergman & Co, and used as backdrops between seating booths, there’s a sense of artistry, without the cost.