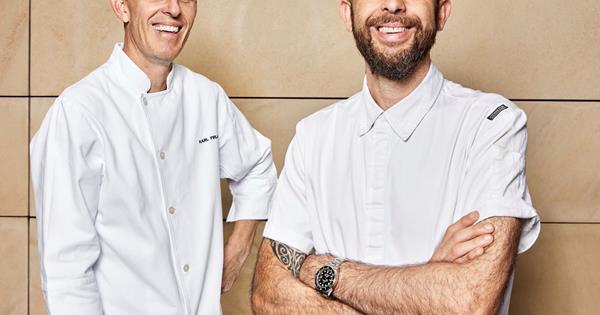 There are big shoes to fill, then there’s there’s Momofuku Seiōbo-sized shoes to fill. The Star’s fine diner, which closed midway through last year, attracted legions of fans – both locally and abroad – over its nearly 10 years in operation.
But chefs Federico Zanellato and Karl Firla have decided they’re up to the challenge. The pair co-own Restaurant Leo (and Picco Leo): a smart and slick Italian restaurant in Sydney’s CBD. Zanellato is also chef at LuMi Dining, an Italian-Japanese fine diner that ranks among Australia’s best. Firla, meanwhile, was the owner and head chef at Oscillate Wildly: the now-closed Newtown dégustation-restaurant that was renowned for melding impressive cooking with a neighbourhood bistro feel.
But despite being two of Sydney’s most acclaimed chefs, they still had their reservations about signing on to the space.
“”Karl and I, at the beginning, we were a bit hesitant,” says Zanellato. “Considering [Seiōbo] had been running successfully for nine years and it was recognised worldwide.”
“We thought, what do we bring? How do we change it; give it a different look and feel so guests feel like they’re coming into a different space? After a lot of discussion, we came up with quite a unique dining experience that hasn’t been done in Sydney so far.”
That dining experience is Ele by Federico and Karl: an immersive multisensory restaurant, opening in early autumn, where audio, visual and gastronomic elements will combine. It’s less dinner-and-a-show, and more the-show-is-dinner.
“It’s a progressive tasting – in the one dining experience, you’ll experience all the different zones of the dining room,” says Firla. “You won’t spend your whole evening in the same position in the dining space.”
That space has changed markedly – curtains, projections and art installations now partition it into three distinct areas: the bar, the dining room, and the kitchen counter (left intact from its Seiōbo days). Each diner (there’s only room for 15 to 20 guests per sitting) will move throughout the restaurant’s zones over the course of their meal.
Ele (pronounced “elle”) draws its inspiration from the elements – earth, wind, water and fire. That’ll show up in the audio and visual components, as well as on the plate, with the intention of creating an immersive experience that will whisk you away from the outside world. The menu will showcase Australian produce – expressed through that elemental lens.
Zanellato and Firla have both racked up time on the pans at some of the best restaurants in Australia – and the world. Even with that much experience, this is a brand new undertaking for the pair. Although this style of dining is becoming increasingly popular overseas, it’s still a nascent concept on our shores. Zanellato and Firla aren’t revealing too much just yet, but they cite Shaghai’s Ultraviolet and Copenhagen’s Alchemist, which have three and two Michelin stars respectively, as examples of restaurants abroad doing similar things.
Ele is a big and different step for a space that housed one of Sydney’s beloved restaurants. Zanellato and Firla are excited about the challenge of the new concept. We are too.
Ele
Level G/80 Pyrmont Street, Pyrmont
thestar.com.au