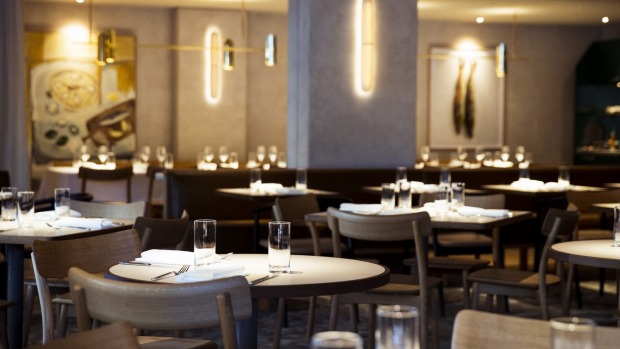 Neil Perry’s Double Bay restaurant Margaret opens on Saturday, June 26, and you have to question whether the veteran chef has been selling a misnomer with all the talk of it being a low-key neighbourhood restaurant.

Margaret is one luxe local eatery, from the specialist oyster fridge to monogrammed trays of Sheffield silver, cut glass and steak knives made with a samurai-worthy level of detail.

Money has always talked in Double Bay, and from the ground up Margaret is a $5 million addition to the smart suburb. It might just be the restaurant the postcode deserves, but Perry is keener to push its focus on Australian produce.

The venue is named after his mother, Margaret, and he has plans to eventually put her steak and kidney pie on the menu alongside the duck breast, rock lobster and freshly landed swordfish.

Amazingly, it’s the first restaurant Perry has owned without partners. He might have lost count of exactly how many he’s opened over the years, but the sole responsibility has added to the stress. “It’s 100 per cent mine, I’m not sleeping at night,” he says.

But living nearby, he’s a Double Bay regular. “It’s the throat of the eastern suburbs. It is a great spot, it always feels four degrees warmer here.”

“[Margaret] is a beautiful restaurant but it’s just bricks and mortar – people are the heart and soul of a restaurant.”

The hand-picked team includes Perry’s daughter, Josephine, and head chef Richard Purdue, who started with Perry in 1992 before snaring hats elsewhere and landing a post as head chef at Rosetta Sydney.

“Richard and I share the philosophy of asking what can be taken off the plate to make the dish even better,” Perry says.

Purdue oversees the arrival of whole tuna and swordfish and promises some seafood menu surprises with a steady supply of “mystery boxes” from supplier Bruce Collis.

He points to Perry-level attention to detail. There are two cool rooms, set at different temperatures. And Purdue and Perry have been working for weeks refining a salsa macha reduction – just one component of a salad dressing.

“It’s not the last project I’ll do, but I want it to be the restaurant I see the end of [my] career out in. There’s a really beautiful banquette, I can see myself hopefully sitting there one day with a drink.”

Coffee & Convenience: Why Drive-Thrus Make All the Difference Among Today’s Consumers

Coffee & Convenience: Why Drive-Thrus Make All the Difference Among Today’s...