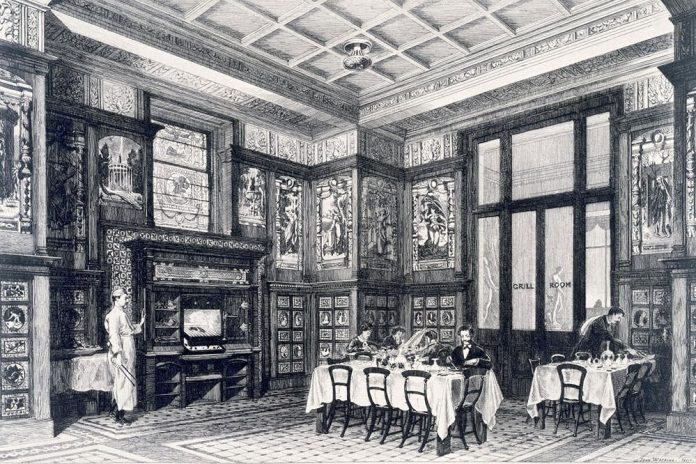 The following is the editor’s letter from the February 2020 issue of Apollo.

‘An ace caff with quite a nice museum attached.’ That Saatchi & Saatchi punchline, which appeared on six posters promoting the V&A in 1988, still gets wheeled out whenever museum restaurants – or indeed cultural marketing campaigns – are up for discussion. At the time, the posters made the old guard choke on their Chelsea buns; the campaign even cropped up in a debate about the museum in the House of Lords. Reflecting on the controversy in the London Review of Books, Nicholas Penny described how the posters had ‘humiliated one of the greatest educational institutions in Britain’.

That the slogan remains so well known more than 30 years later suggests that the Saatchi brothers had grasped something about the museum sector’s direction of travel. In the intervening decades, museums have increasingly focused on visitor facilities, perhaps chief among them the cafes, restaurants and bars that tempt the public to lengthen their visits and part with their cash. The Royal Academy now boasts three public cafes and restaurants, as well as three catered spaces for its friends and patrons and a further area, the Academicians’ Room, for private members. The Met, its website declares, ‘is a destination for all things art and culture, including dining’, marketing the eating options under headings such as ‘Distinctive Dining’ (the 4th-floor dining room) and ‘Something for Everyone’ (the basement cafeteria). Press releases about museum restaurants drop into my inbox on an almost weekly basis: the new ‘Beyeler Restaurant im Park’; a J&B Rare cocktail launch at the Rex Whistler restaurant at Tate Britain; a ‘mushroom-inspired menu’ to coincide with an exhibition about fungi at Somerset House.

At the V&A, of course, the ‘ace caff’ line played on the history of the place, as the first museum to open a cafe, in the 1850s. From one perspective, the relationship between museums and food is an uneasy one, given that most museum-goers instinctively understand – whether or not they heed the knowledge – that food is banned throughout galleries and exhibition spaces. All the same, food has become increasingly fashionable as a subject for exhibitions, at a time when the choices we make about our diets and where our food comes from are more noisily debated than ever. At the V&A itself last year, ‘FOOD: Bigger than the Plate’ chewed over everything from ‘urban farming to gastronomic experiments and synthetic meat’; ‘Feast & Fast: The Art of Food in Europe, 1500–1800’ at the Fitzwilliam Museum, Cambridge, makes a more historical enquiry into our appetites (until 26 April).

The February issue of Apollo includes the magazine’s first museum restaurant review (read it online here). Its subject is – where else? – the V&A Café, housed in the Refreshment Rooms that were decorated by leading designers from the mid 1860s onwards. Future issues will carry reviews of all manner of museum restaurants, ranging from homespun cafes in house museums to canteens and exclusive eateries in major institutions. Our objective is not, primarily, to assess the food on offer, but to consider more broadly what any given museum restaurant can tell us about how that museum sees itself – and how it treats its visitors.

Might a restaurant be part of a museum itself, if it displays works from the collection or, like the Rex Whistler, houses a significant mural? Where does the balance lie between quality, value for money for visitors, and the urge to drive revenue into museum coffers? Can menus that take their cue from temporary exhibitions do anything to enrich the visitor’s understanding of that art? (The National Café at the National Gallery has through the winter been offering a ‘Gauguin-inspired afternoon tea’.)

‘Punters scoff a lot of coleslaw in the National Gallery of Ireland,’ reads the last line of a poem in Paul Durcan’s Crazy About Women (1991), a collection inspired by works in the museum’s collection. It’s one of four poems in the book, by my count, that abscond to the museum restaurant when their ostensible stimulus is an individual oil painting – in this case, Grief by Jack Yeats. In another poem, the sitter in a portrait by Reynolds seems to step from the canvas to take his lunchbreak: ‘While waiting for his lasagne to hot up in the microwave / He leans nonchalantly on his swordstick.’ There is something inherently comic about museum restaurants, perhaps, but most museums take them more seriously than ever.