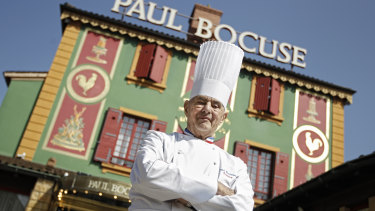 The news went down like a burnt soufflé in the world of high gastronomy, with food writers on both sides of the Atlantic expressing their outrage.

In France – though the country has been crippled by more than 40 days of transport strikes, while at the same time being caught in the middle of the Trump administration’s standoff with Iran – the humiliated restaurant became the news of the day, dominating the headlines.

The reason for the outrage was not so much the tired cliche that France loves its food, which, of course, it does. This was more about a diminished national symbol in a country deeply proud of its traditions but increasingly anxious about its place in the world. French cuisine used to be seen as the pinnacle of sophistication, but these days not so much.

The restaurant – still in the throes of a transformation after Bocuse’s death – issued a crestfallen statement on Friday. “Although devastated by the inspectors’ judgment, there is one thing we never want to lose, and that is the soul of Monsieur Paul,” the statement read. “Paul Bocuse was a visionary, a free man, a force of nature.”

In an interview, Gwendal Poullennec, the director of the Michelin Red Guide that issues the star-ratings that can make or break a chef’s career, said that he traveled to Lyon on Thursday to inform the restaurant’s team in person about the downgraded status. “Obviously, there was a lot of emotion,” he said.

“[Bocuse] was someone who made a lasting imprint on French cuisine, in France and around the world,” said Poullenec.

He said that the iconic chef’s restaurant remains an exemplary destination – just no longer a destination that merits the three-star designation. “The difference between two and three stars is that three means a true culinary experience of irreproachable quality,” Poullenec said.

“This is a variation in the level of the cuisine, but it remains excellent,” he said.

Michelin’s official 2020 ratings will be unveiled January 27 at a ceremony in Paris, an event that has known its fair share of controversies.

Such is the power of the ratings that they have even been linked to chef suicides, such as in the case of Bernard Loiseau, who killed himself with a hunting rifle in February 2003 after the French press reported rumours that his restaurant would lose its third star.

The ratings, which change every year, are conducted by a team of anonymous international diners who visit a restaurant as many times as they see fit in a given year, Poullenec said. These observers evaluate on a five-part rubric: the quality of the ingredients, the mastery of the cooking, the harmony of flavours, the personality of the chef and the consistency of quality.

For industry professionals, the fall of Bocuse’s establishment is not just an affront to a single venerable institution but also a blow to French cuisine as a whole, an art form that inspires less awe since tastes have changed and food tourism has put other destinations on the map.

Bocuse embodied that art form at its peak. He was a man who lived for sensual pleasures, which he was never embarrassed to admit.

“Food and sex have much in common,” he told Britain’s Daily Telegraph newspaper in 2005, the same year he published an as-told-to memoir that detailed his extramarital affairs. “We consummate a union, we devour each other’s eyes, we hunger for each other.”

But the world of classic haute cuisine is hardly as sexy in 2020 as it was in Bocuse’s heyday, when the hottest tables in France, New York and London were all temples to precisely the kind of cooking Monsieur Paul had pioneered. Many of those restaurants are now long gone. The ones still in operation are often proud relics of a vanished past.

“The French very deliberately, starting in the sixteenth and seventeenth centuries, exported their cuisine as a point of pride,” said chef and food writer Ruth Reichl. “Go through an American recipe book, or think about the words we use for cooking – sautée, hollandaise, soufflé. The French dominated. This is where their honour is.”

“France used to be the only place you’d go,” she said. “The very word in English is ‘gourmet.’ If you were a gourmet, you went to France to eat. Now if you’re a gourmet and only eat French food, you can’t really call yourself a sophisticated eater.”

The Bocuse demotion, Reichl said, is bound to take a toll.

“He was the god of French cuisine. This really hits France where it hurts.”