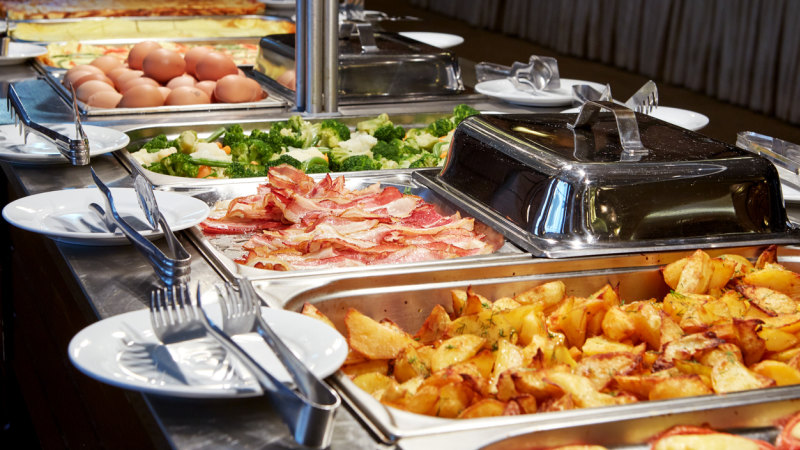 The person running the establishment was not without his own tricks. Small dinner plates would be provided and serving spoons of reduced capacity. Tiny tongs would limit the number of items that could be transported from buffet to plate.

More cunningly, cheap, filling ingredients would be placed early in the proceedings – Sizzler’s cheesy bread being the most obvious example. By the time you arrived at anything pricey, your plate would be full: that was their masterstroke.

It often fell to the father in the family to give the troops their battle orders as they drove towards the field of combat. He’d patiently explain how to sidestep those cheap ingredients before nipping in later to seize victory amid the steak and chicken. Then – once those ingredients had been defeated – he’d instruct the team on how to casually pick up a fresh plate as if you’d just arrived, loading it high as if famished.

He might then discuss some scientific facts, noting that, just as a cow has four stomachs, humans are equipped with two – the dessert stomach being an entirely separate system, and therefore needing to be filled afresh however much main course had been consumed.

“Don’t stint on the soft serve,” he’d say, his voice booming in the car, and the tiny, fresh-faced troops, three of them, lined up on the back seat of the Valiant, would steel themselves to meet their leader’s expectations.

If you want a sense of the scene, think of the St Crispin’s Day speech from Henry V, then up the emotional heat a little.

The ambition was to never want to eat again. Or, better, for the chef to emerge from the kitchen and beg for mercy.

Of course, it was different if it was a hotel breakfast buffet. The battle plan, in those circumstances, was to fill both your stomach and then your handbag.

“They factor it in when they set the prices,” the mother would say as she loaded four bread rolls with ham, wrapping each in a paper napkin, then secreting them in her bag, having first peered from side to side to check the coast was clear.

“That’s lunch,” she’d say with a look of triumph, and no one seemed to comment on why this normally honest woman, someone who would count her change in the local store to make sure the owner hadn’t given her too much, had suddenly transformed into both a criminal mastermind and an expert on hotel economics.

Next, she’d be whispering to her 10-year-old daughter: “Now quick, Rachel, get in fast while the waiters are busy and grab four of those blueberry muffins. We can have those for lunch dessert. And Tristin, you keep cockatoo for your sister.”

Then finally – whether it was Sizzler, or the posh hotel or the local Chinese place – the family would take leave of the field of battle, their table strewn with the fallen.

Only an hour had passed and yet whole birds had flown down gullets; whole schools of fish had swum into mouths; and whole battalions of sausages had been led to their grisly fate. Even the cheesy bread was no more.

The victorious family would waddle towards the doorway, the staff watching them with a mixture of astonishment, admiration and alarm. It had been Bradman v Larwood; Ali v Foreman; Hillary v the mountain.

The family had won, this happy few, this band of brothers. The owner of the establishment would bury his head in his hands and mutter darkly about this family, this bane of his bains-marie.

Next time he’d do better. That would be his promise to himself. He’d purchase ever-smaller plates. He’d offer cheesy bread in a variety of forms; whole metres of it, before you got to anything decent. He’d install flickering neon lighting so people were forced out after 20 minutes.

He would live to fight another day.

But now, all these decades later, the battle is finally over. The troops have been sent home. Coronavirus has forced a truce.

All that is left is the memory of buffets past and those families that had a point to prove.

And, from this day to the ending of the world, they will be remembered – in their flowing cups and in their over-piled plates. As Henry V didn’t quite say: “What feasts we did that day.”

Richard Glover is the author of 12 books, including the prize-winning memoir “Flesh Wounds”. He presents “Drive” on 702 ABC Sydney and the comedy program “Thank God It’s Friday” on ABC local radio. For more: www.richardglover.com.au

How to Apply for the Restaurant Revitalization Fund – QSR magazine

How to Apply for the Restaurant Revitalization Fund – QSR magazine