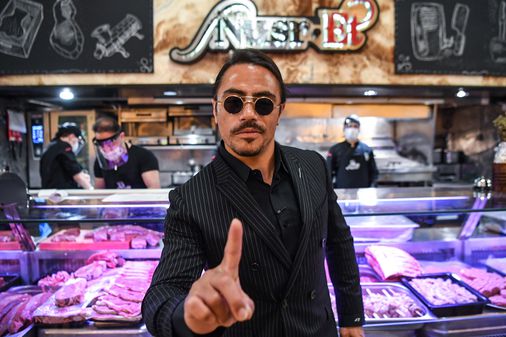 Viral sensation Salt Bae, whose real name is Nusret Gökçe, teased the opening of his Boston restaurant for months. But it didn’t take nearly as long for city officials to shut down Nusr-Et Boston Saturday, just a little over a week after it opened, citing a string of COVID-19 safety and other health violations.

Over the weekend, the city’s Licensing Board and Inspectional Services Department ordered the restaurant at 100 Arlington St. and its YouTube- and Instagram-famous chef to immediately cease operations. It also indefinitely suspended Nusr-Et’s alcoholic beverage license.

Now Gökçe will face the Licensing Board in two inspection hearings Tuesday, according to a statement from city officials. The meetings are scheduled for 10 a.m.

Here’s the string of reports that led to the closure:

A 311 complaint referencing that Friday also surfaced in the city’s log almost a week later. It said diners and servers often were not wearing masks and that “many tables were only 3ft apart.” The customer went on to explain that when he and his wife arrived, “there was no one near the host stand, but by the time we left around 9pm, there were 20-30 people standing around the host stand taking selfies and socializing without masks on.”

Saturday, Sept. 19: A city inspector dropped by Nusr-Et Boston on its second day open and issued a violation for “the long line of patrons” huddled in and around the spot and “failure to social distance,” according to a statement.

The board said it fielded numerous complaints about social distancing, masks, and safety through the restaurant’s debut weekend. These include one 311 complaint that called the spot “super crowded” and included pictures of a large group of mostly unmasked people lingering by Nusr-Et’s door.

Sunday, Sept. 20: A city inspector swung by again but found no violations.

Wednesday, Sept. 23: The city issued a second violation for shortcomings in COVID-19 safety guidelines, according to a statement.

Nusr-Et also received citations from the Inspection Services Department for having two blocked fire exits, keeping the refrigerators too warm, and not running the dishwasher at a high enough temperature. Inspectors also faulted the restaurant for not obtaining the correct permits. An additional point on the report said there was “evidence that the [person in charge] is not overseeing day-to-day operations to ensure establishment is operating in compliance with the food code.”

Restaurant representatives were told the city intended to schedule an emergency hearing.

Another 311 complaint that day simply said the restaurant is doing “a terrible job.”

Thursday, Sept. 24: In an inspection, the city found that many of the violations had been resolved. However, the dishwasher temperature issue remained a problem.

Saturday, Sept. 26: Complaints and documentation of the health violations continued to flood in through the week from the Mayor’s Office of Neighborhood Services, the Bay Village Neighborhood Association, and residents, a city statement said.