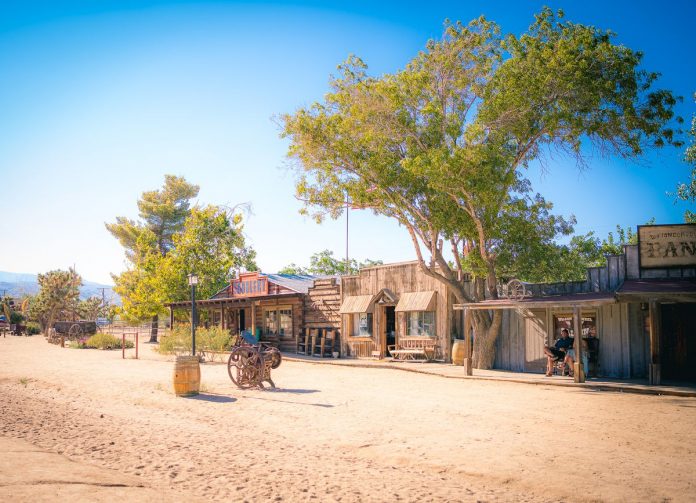 Arid shots of youthful-looking people hanging around places like Pioneertown, the 1940s-era former Western film set town an hour north of Palm Springs, have only become more pronounced these past six months, even as the ongoing coronavirus pandemic ripped through both Riverside and San Bernardino counties in the summer. Those with the ability, willingness, access, and means have found ways to sneak off into the open air outside of Los Angeles, eternally chasing the space (and the perfect photograph) that the desert affords. With COVID-19 limitations, such as closed indoor dining rooms, likely to stick around for a long time, the hospitality industry is following the shifting crowds.

Red Dog Saloon, which opened in late August, is the first in what is likely to be a new crop of hospitality options to go live in the high desert of San Bernardino County in the coming months and years, though co-owner Adam Weisblatt of Los Angeles-based Last Word Hospitality (Same Same in Silver Lake, Found Oyster in East Hollywood) has admittedly been working on this project for two years. His first experience with the unincorporated community started with a stay at the Pioneertown Motel and a look at the crystal-clear evening sky. Now he’s back as an employer, a soon-to-be local, and hopefully as a community partner.

“I think COVID-19 has pushed things forward as much as five to 10 years,” says Weisblatt when speaking about the influx of arrivals to high-desert communities like Yucca Valley, Joshua Tree, Pioneertown, and Flamingo Heights (home to nationally recognized restaurant La Copine). The area has long been a lower-cost desert option for those who never quite fit into the Palm Springs milieu, from “locals to celebrities to hipsters to real cowboys, the military, and other desert folks,” says Weisblatt.

The tiny, sun-beaten collection of wooden buildings that acts as the center of town dates to 1946, when the area was a prime Hollywood filming location and weekend getaway. The Red Dog Saloon has decades-old history here, from a stint as a Hell’s Angels biker bar to a mysterious fire that may have been set by a competing owner. Now Last Word, Weisblatt, and a collection of partners are in to see a new generation of growth. They hope to mingle with the community both as employers and as neighbors, ideally without stepping on toes.

“We’re really just trying to bring the place back to what it was,” says Weisblatt. “We have the original bar top and the original back bar, it’s just stunning. It’s really about capturing as much of the history of the place as possible.” Now period-specific artifacts have been scavenged across the Southwest, and a mural of the late local entertainer Dazzlin’ Dallas Morley adorns one wall.

Weisblatt’s team represents the desert’s melding demographics. There are lifelong locals and a lot of people who moved to the high desert in March, he says. “It was LA, New York, and the Bay Area… from great bars and restaurants, with all sorts of experience.”

The partner list is littered with known names, like legendary barman Eric Alperin (of the Varnish) and his Big Batch consulting firm, and Last Word’s Holly Fox, Mike Santos, and chef Ari Kolender. They, along with Jean Michel Alperin, Jeffery Baker, and brothers Mike and Matt French from the Pioneertown Motel all bring a wealth of hospitality knowledge to the mix, along with longtime local faces that will staff the bar and kitchen.

“By pure dumb luck, we decided to install a window where you could order directly into the kitchen,” says Weisblatt. “Along comes COVID-19, and it’s aligned with how we’re currently functioning.” Expanded outdoor seating is all that’s possible for Pioneertown at the moment, so Red Dog has grown to include shade structures and picnic tables galore, plus those alluring stars at night. “There’s so much space out there, it feels great.”

Weisblatt sees more growth in smaller communities in the years to come, owing in part to the virus, to climate change, and to a reconsideration of what really matters when we’re all working from home anyway. Last Word is diversifying its own footprint with Red Dog, and plans to continue to grow outside the city, trying to stay ahead while leaving long-lasting roots behind.

At least that’s the idea: A little old, a little new. The Tex-Mex menu is rich in tortillas and queso, stewed beans, and cider-braised carnitas. The wagyu brisket taco runs $5, and the asada is actually made with mushrooms. But there’s also elote using corn from area farms, and spicy pickle bar snacks. A batched-cocktail menu from the Alperin brothers hovers at $10 a drink, and there are three different preparations for micheladas. Weisblatt sees the approachable menu as a welcome sign for those worried about a flood of high-minded restaurants to the high desert.

“Hopefully one result from COVID-19 is a resurgence in smaller communities,” says Weisblatt, “and a reinvestment in the people there. We want to complement what’s already going on, because these communities are already really vibrant.” He and his team have signed a 30-year lease on the property, so they don’t plan on getting in and out quickly. After all, there’s a lot of room, and an ever-increasing customer base chasing the open air and a perfect-looking desert lifestyle. Weisblatt is just hoping that the next Instagram shot features both a big sun hat and some brisket tacos.