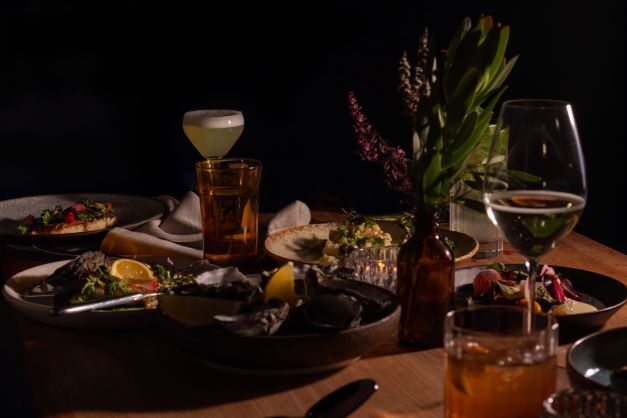 Restaurateurs and siblings Nick and Zac Beerens are behind Copycat — a new bar and eatery in Elsternwick.

After the success of their first venture Mammoth café in Armadale, the pair are excited to be opening the doors to their new establishment, which will remain open until 1am.

“We’re not reinventing the wheel, we’re reinventing date night,” says Co-Owner Nick Beerens. “Our restaurant is a representation of what we think is the best in Melbourne hospitality and we are excited to bring it to Elsternwick, a location we feel has been missing a late-night date spot.”

The menu champions local produce with a generous offering of vegetarian and seafood options that are all made to share.

On the dessert front, expect baked cheesecake with citrus and baklava crumbs, bombe Alaska with salted macadamia and chocolate and a spiced pear and almond cake.

A vast range of wine options from esteemed Australian winemakers are part of an extensive beverage list, alongside a cocktail including Pink on Wednesday (raspberry and vodka) and Velvet Fog (absinthe and melon liqueur).

“We’ve grown up in Elsternwick and now we are taking it into our own hands to create what’s been missing — a place with good vibes, good drinks and bloody good food,” says Nick.

Copycat officially opens September 6 from 4pm-11pm Sunday to Thursday and 4pm-1am on Friday and Saturday.

From October 1, opening hours are 12pm-11pm Sunday to Thursday and 12pm-1am Friday and Saturday.