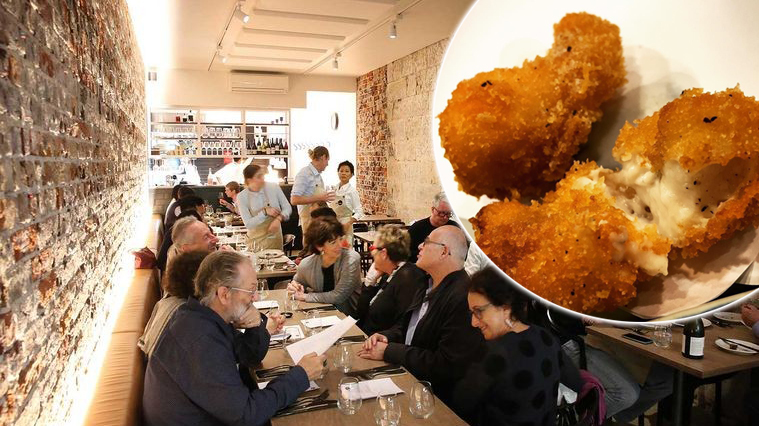 We’ve heard of some weird food creations before but this one that was recommended to us by a world renowned chef is on a whole other level.

Masterchef judge and chef George Calombaris joined the Kyle and Jackie O Show when he told us about a dish he’d ordered at a restaurant in Sydney.

And while he had his doubts at first, he told us that it was actually simply scrumptious!

What was the dish do you ask? Prepare yourselves for this one… George was gushing about DEEP FRIED FISH SPERM!

Yep apparently that’s a thing and according to George we have to try it.

It all came about when Kyle was asking George where his favourite place to eat in Sydney was (turns out chicken shop El Jannah gets his tick of approval) when he began to tell us about the unusual dish he tried at a Paddington seafood restaurant.

“Yesterday I was at Saint Peter’s and had deep fried fish sperm,” he began. “And it was, can I say, it was delicious!”

Kyle and Jackie O were gobsmacked by the unusual dish and wondered how on EARTH a chef would get their hands on some fish sperm to deep fry.

“I don’t know but it was, I can’t believe I’m saying this on radio, it was bloody delicious. “Josh Niland the chef there is incredible, cooking some amazing stuff.”

If you’re wondering what this fish sperm would taste like, don’t worry George did his usual enthusiastic thing and told us all about it in detail!

Although if you’re a fan of chicken nuggets, stop reading now, because this might just put you off them forever!

“It’s sort of like, imagine a massive chicken nugget. But it’s crispy tempura on the outside and on the inside creamy and just delicious stuff,” he raved.

“There was a little thousand island dressing I think on the side, little squirt of lemon.”

If you’re feeling enticed, you can head down to Saint Peter restaurant in Paddington and try it for yourself!