I took my wife, who doesn’t enjoy highly spicy food, to a Korean restaurant. It wasn’t with the expectation that she would suddenly change the preferences of a lifetime, or that she lost a bet. We had family in town for the holidays, and one of them craved the famously flavorful cuisine that they had learned to love here in LA. My heat-averse wife came along because she didn’t want to miss a minute with family, and after I assured her that she could find things she’d like on the menu.

Gaya Korean Tofu & Grill, which recently opened on Torrance Boulevard west of Anza, has become my favorite traditional Korean restaurant. It is named after a medieval confederacy of city-states in the far south of the Korean peninsula, but the menu doesn’t reflect southern specialties. It’s a deep dive into Seoul-style favorites, with specialties of tofu soup, noodles, and grilled proteins, all served with the traditional sides.

The restaurant occupies the space that was Moo’s Chinese Restaurant for many years, and that formerly dim and worn interior has been remodeled into a sparkling and colorful place. Don’t expect the tabletop grills that are built in at most local Korean restaurants, because all grilling here is done in the kitchen. I like tabletop cooking, but don’t miss the greasy miasma that is often a side effect. You’ll be offered menus that are colorful but not highly informative, which may be confusing to diners who aren’t familiar with this cuisine. Luckily the servers are fluent in English ,and patient with explaining things, and you can always consult the internet on your phone if you want to know more. The main thing to remember is that you’re only ordering the main course, since everything comes with an array of side dishes, called banchan.

On one visit we ordered an item listed as an appetizer anyway just because we enjoy it so much. This is the seafood pancake known as pa-jun, a batter packed with minced fish and shellfish along with scallions that is griddled to crispness. The portion is large so I’d only recommend this as an appetizer for three or more people, unless you plan to take leftovers home. It has no peppery seasoning but is very full-flavored, and Gaya’s version is as good as any I’ve had in K-Town. 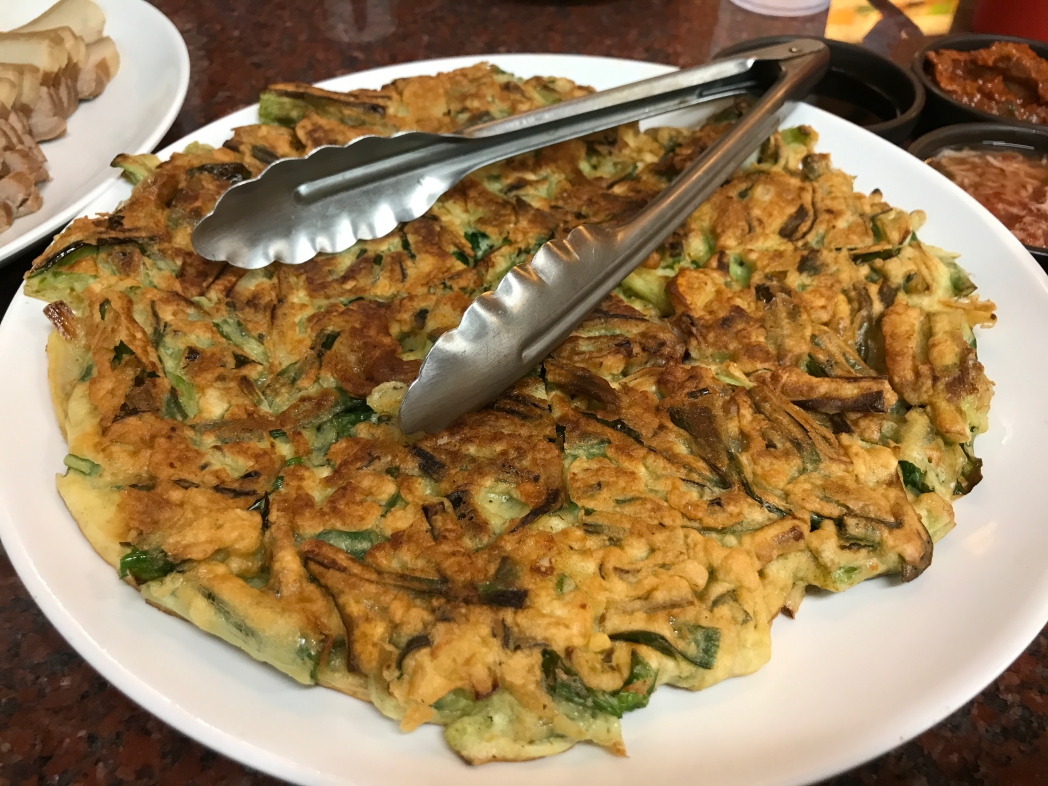 The seafood pancake at Gaya. Photo by Richard Foss

The banchan that arrived was composed of six small bowls containing two kinds of marinated tofu, cucumber and cabbage kimchi, delicious pickled bean sprouts, and a fluffy potato salad. The size of the portions was deceptive, because the bowls will be refilled as often as you like. The selection changes occasionally, but is always a mix of items that enhance natural flavors with others that include peppery kimchi.

On the visit with my spice-averse wife, we ordered a bibimbap rice dish, Japanese-style pork katsu, and bossam, steamed pork belly that arrived with napa cabbage leaves for wrapping. Bibimbap is one of the more popular Korean dishes, a mix of rice and vegetables served in a hot stone bowl with toppings of a fried egg, toasted seaweed, and a sprinkling of scallions and sesame seeds. The stone bowl can keep your rice hot if you stir it around or toast the rice so the edges become crispy if you don’t, and most Koreans enjoy the mix of textures, and more intense flavor of the toasted rice. We had ordered the version with kimchi and pork added in, and the heat mellowed and sweetened the kimchi a bit so that even the spice wimp at the table liked it.

She wasn’t a big fan of the much more mildly flavored bossam because the fat in the thickly sliced pork belly wasn’t rendered or crisped. It’s not supposed to be – the attraction is the contrast between the silky-textured fatty meat and the crisp cabbage and spicy pickled radish served with it. Two sauces are provided to enhance that contrast further, a mildly spicy bean paste, and a pungently spicy fish sauce. I used both and found that they made things much more interesting.

The chicken katsu is probably on the menu mainly for customers like my wife who find Korean food overwhelming, but it was very well done, a giant portion of breaded and fried pork with a mild curry gravy. It came with rice and a salad with miso dressing, and while it seemed out of place on our table it was enjoyable on its own merits. 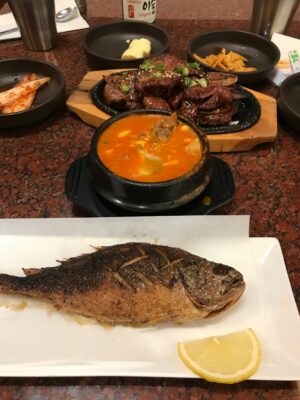 Dinner at Gaya Korean Tofu & Grill: a yellow croaker fish that has been air-cured and fried, tofu soup with dumplings and beef, galbi short ribs, and some side items in the background. Photo by Richard Foss

I reveled in the spicier and more unusual items from Korean cuisine on other visits, and was tempted by the black goat stew, in which the strongly flavorful meat is balanced by vinegar and hot spices, but haven’t tried that item here yet. Instead we tried a tofu soup and grilled fish combo, spicy beef noodle soup, and the popular favorite, LA Kalbi short ribs.

I had been leaning toward the goat but decided on fish after the owner of the restaurant, who had stopped by our table while we were deciding, mentioned that it’s not a fresh fish or a pickled fish, but a “half-dried” fish. This is a whole medium size fish that has been salted and air-dried for a few days so that the flavor is intensified. This is almost the same technique used in Britain to make kippers, and if you’ve ever had those as part of your English breakfast the effect is similar. It’s slightly salty, the meat very flaky, and the flavors are milder than you might expect. Two types of mackerel and yellow croaker are offered, and we selected the croaker which we suspected would be least oily. The crispy skin and fragrant meat was enjoyable, and I’d have it again.

The fish is available as a main course by itself, in which case you get two of them, or as part of a combo with tofu soup, in which case you get one. I suggest the combo, because the flavors are much more interesting together. The tofu soup is in a spicy but not volcanically hot broth, and is available with a variety of add-ins including different types of meat, vegetables, or stuffed dumplings. We got the beef with vegetarian dumplings and a raw egg in it, poached at the table. Alternating bites of the salty fish with the spicy soup was an enjoyable experience. On another visit we tried a spicier broth with beef, seasoned bracken fern, green onion, and noodles to enjoy serious heat. It wasn’t as bracingly hot as we’ve had at some other Korean restaurants, but our cheeks were flushed and I was sweating a bit by the time we finished it.

Finally there was the kalbi short rib, which arrived at our table on a hot but not sizzling platter. The marinade was made with a base of apple juice that caramelizes on the grill for a somewhat sweet flavor, and the meat had been cooked to medium rare. People using tabletop grills in Korean restaurants frequently scorch their meat to the point that it tastes like sweetened charcoal, but this is the way it’s supposed to be.

We paired out meals with hot sake on one chilly evening and cold soju on another, and cups of hot roasted barley tea, which I advise you try. This has something of the character of coffee without the caffeine, and it’s great when you want a warm drink that won’t keep you awake.

Gaya Korean Tofu & Grill is the closest traditional Korean restaurant to the Beach Cities, but that isn’t the only reason to go there. The welcome is warmer than in most comparable places, and the prices are modest – nothing on the menu is more than twenty bucks for a full meal. It’s a bargain for excellent quality food, and even a person who doesn’t like to scorch their tongues will find something to love here.