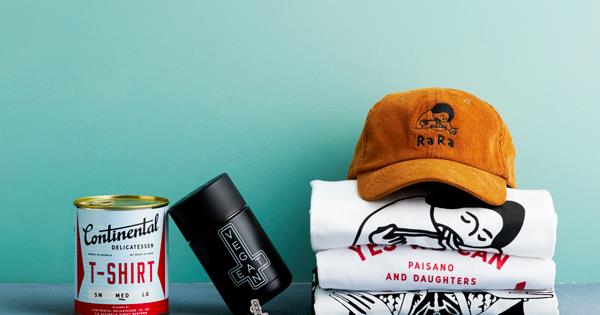 When Smith & Daughters first opened its doors in Melbourne’s Fitzroy back in 2014, Shannon Martinez knew that the logo they’d come up with – an inverted cross emblazoned with EAT VEGAN – was special. To coincide with the opening, they had some T-shirts done up: all black with a supersized logo on the back. It didn’t take long for them to sell out.
“I’ve been in bands my whole life, so merch has always been something we’ve done,” says Martinez. “It was very obvious from the start that branding was going to be a huge part of the business.”
She wasn’t wrong. After the T-shirts came tote bags, pins and hoodies. Then customers started asking for coffee cups. Water bottles. Aprons. Baby clothes.
“If people ask for it, we give it to them. The amount that we sell actually surpasses bands. It’s insane,” Martinez says. “At Christmas, I think we sold over $20,000 worth of merchandise.”
Smith & Daughters may be on the pointy end of the trend, but food merchandise – worn with the same fervent dedication that a metalhead might wear a Metallica tee – is something that’s happening industry-wide.
“Hospitality merchandise has expanded so much in the past few years,” says Michael Nicolian at Sydney’s Continental Deli. The first one he recalls wanting to get his hands on was a Tio’s Cerveceria T-shirt. “It had a dog taking a shit on the back. It was just so cool.”
It makes sense that industry people get caught up in the hype, but increasingly, it’s become a badge of honour for diners, too. Continental’s T-shirts were initially designed as the staff uniform, but when people kept asking about them, the team decided to offer them for public sale as well. It also gave them another chance to put their beloved canning machine to good use: each T-shirt comes packaged in a Continental-branded tin.
Nicolian chalks the trend up to diners wanting to hold onto their experience once the meal is over.
It’s something that Martinez has noticed, too. “I think restaurants attract a cult status just like bands do. Chefs are treated like rock stars,” she says. “People are so obsessed that they collect the books, they eat there every week. It’s the same as following a band.”
Merchandise is a smart way to get a brand out there, but for some, it’s about more than just marketing. At Sunny’s, a good-times pizza joint in Adelaide, it’s a way to engage with the local creative community. “Adelaide’s pretty small, especially the circle of hospitality and the arts,” explains co-owner Ashley Wilson. “It comes from a really organic place.”
It’s a similar story at RaRa in Sydney’s Redfern. Owners Katie Shortland and Scott Gault tapped Melbourne artist Nani Puspasari to draw up their logo – an illustration of a figure bent over a bowl of ramen – which they’ve since had done up on tees, tote bags and corduroy caps.
“We’re a small restaurant, so a big thing for us is supporting the community,” says Gault. One way is through collaborations with artists. Another is through benefiting charity – 50 per cent of profits from tote-bag sales go to the Asylum Seeker Resource Centre, and the Women’s & Girls’ Emergency Centre in Redfern.
While restaurant-branded merchandise is hardly new, the shift towards it being an expression of community might be. “I don’t think people are too proud of big companies anymore,” says Martinez. “They used to be – but now they know it’s better to support local people and the small guys. They’re not proud of McDonald’s; they’re proud of their local corner store.”

The Lost Art of Core Operations