It’s always been an industry of highs and lows, but the last two years has been utter chaos for restaurants and food businesses. While many people deal with packing up desks and setting up rudimentary workspaces at their dining tables, or relearning their times tables to help with home-schooling, restaurateurs can do naught but turn off the burners and stare at the empty tables in their venues and the only maths they’re doing is to calculate how they’ll pay staff and suppliers with little to no income rolling in.

I’ve lost count of the number of eateries that have shuttered their doors, whether for days, weeks, months or forever. Some can only stop, pivot, step, change, pivot and repeat so many times before pandemic-induced fatigue sets in. The recurring dance with this deadly disease has crushed dreams and livelihoods, as well as business.

But as we entered 2021 and South Australia became one of the safest places on earth, some audacious types decided it was time to revitalise old venues and even to open new restaurants to sate the needs of the re-emerging dining public. With capacity limits still a major bane of smaller establishments, some decided it was time to relocate to larger homes. One of these was Soi 38 – which opened its new Pirie Street doors last Monday morning and then was forced to close just 12 hours later. Enter: The Delta Strain.

I hadn’t considered reviewing Soi’s new abode until well after it had settled in. It’s only fair, as new systems and layouts and kitchens and staff can take some time to calibrate. But as a long-time fan of the original Soi 38 experience on Pulteney Street, I’d already made myself a booking for opening night and, with seven days of solitude looming, decided to make the most of it.

The new Soi 38 venue adopts a similar look and feel to the last one, only heightened. It’s on-trend with a fine-dining style, reflected through dusty tones, softened edges and pale timber furnishing. This former Subway outlet has been totally transformed, using sheer fabric and well-placed lighting to create a warm and inviting space.

We’re seated with views into the kitchen, watching chefs work over sizzling pans and flames that create a dance around them. Despite knowing that they’ll be closing in just a few short hours for the first and last time for a while, the Soi 38 kitchen and floor staff are calm and collected – it’s day one and they’re already a well-oiled machine.

In place of a typical name like ‘Snacks’ or ‘Starters’, the first menu section is simply titled ‘Delicious’ and it is spot-on. Always a go-to, the Soi 38 chive cakes are little fried green pillows that sit in an unctuous pool of dark and sticky sauce. They have a beautiful, almost delicate onion flavour and are utterly moreish, with crunch offered by fried shallots sprinkled generously over the dish. 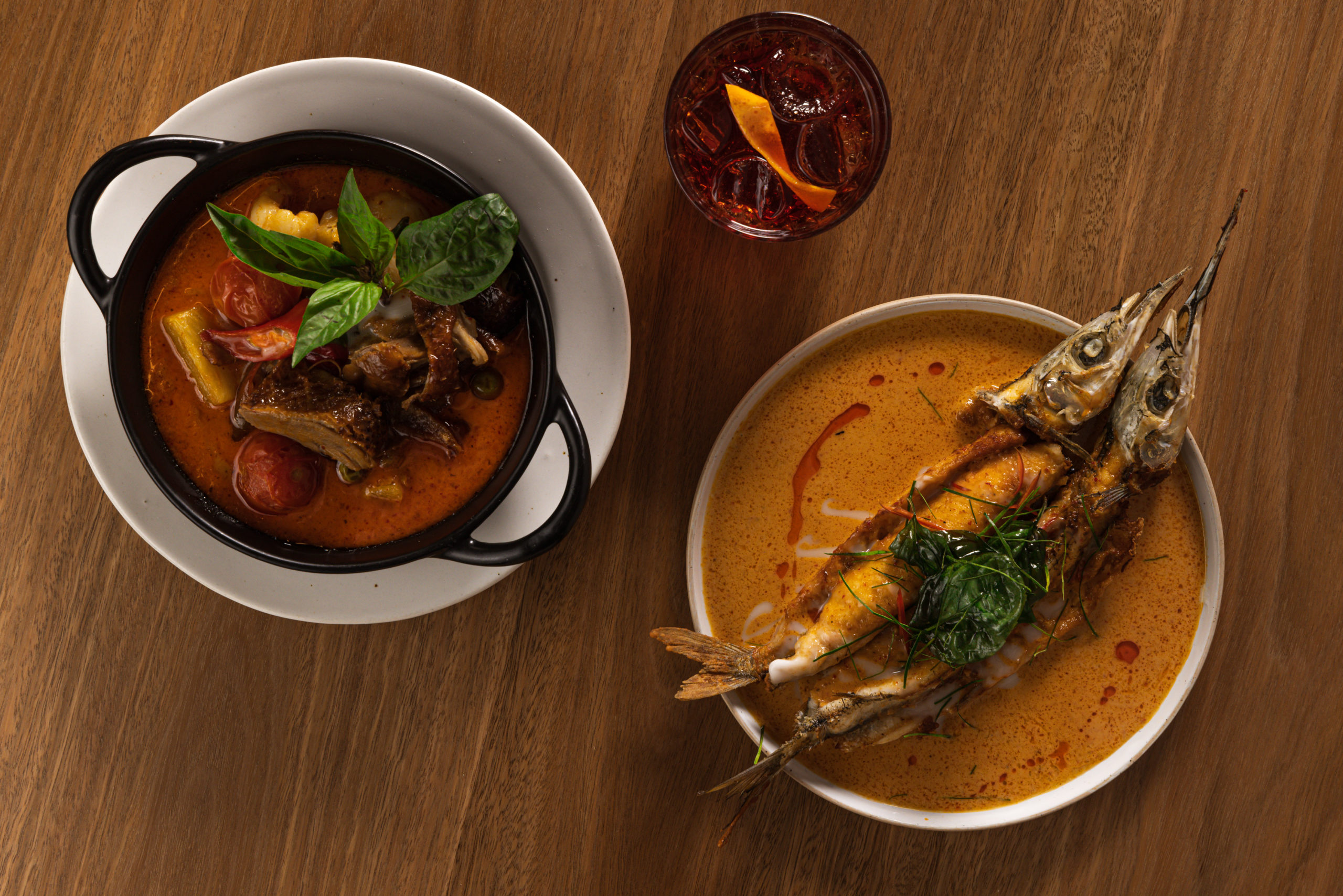 Some of the new dishes on Soi 38’s menu. Supplied image

And then thinly sliced kingfish is presented as florets on the plate: these have been torched on top – reminiscent of the Japanese Aburi cooking technique, with lightly charred edges that give off a pleasant smoky flavour. A salsa seeps between the layers of juicy fish – this spicy sauce takes this otherwise simple dish to a new plane, making tastebuds tingle in all the right ways. Our last plate of ‘Delicious’ comes in bite-sized servings of ginger, lime and coconut-infused blue swimmer crab, artfully piled on betel leaves. But with beauty comes temptation, and (as instructed) we quickly and greedily roll these up into rudimentary spring rolls and pop them in our mouths. Flavour seeps from the roll with each bite, a delicate taste of crab competes with another hit of spice and herbaceous flavour.

Onto mains where we realise the next section could have been labelled ‘Delicious’, too.  Three large oyster mushrooms that have been effortlessly prepared with a quick lick of a flame sit aside a larb salad – this Thai favourite is typically sweet and spicy and benefits from the freshest of herbs and ingredients, dusted with more chilli powder for an extra kick.

Crispy pork belly arrives, jumbled between roughly hewn lengths of an Asian version of broccoli that most closely resembles broccolini. It’s a generous dish with another heavy sauce at its base that has an almost impossible depth of flavour. Pieces of crunchy pork are the absolute hero of the meal, each piece offering a sliver of meat encased by crackling skin.

And lastly, dessert – another section that could be titled ‘Delicious’. A banana crème brulee with coconut ice cream is the most dreamy Thai dessert I’ve tried. It sits alongside another creamy dish in the form of lychee pannacotta, with a perfect wobble and even better flavour.

Like many of its industry counterparts, Soi 38 has proven that with audacity, mixed with talent and a hell of a lot of passion, you can make it in the business. And as it opens its doors for the very first time (again) as we emerge from lockdown number three, I’ll be right there for the re-launch. And I suggest you are, too.

(Due to the current circumstances, please call ahead.)

Jump to next article

InReview is a ground-breaking publication providing local and professional coverage of the arts in South Australia. Your tax-deductible donation will go directly to support this independent, not-for-profit, arts journalism and critique.

This article is supported by the Judith Neilson Institute for Journalism and Ideas.