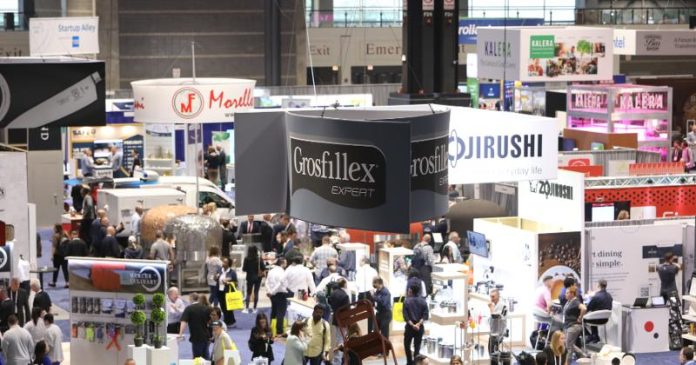 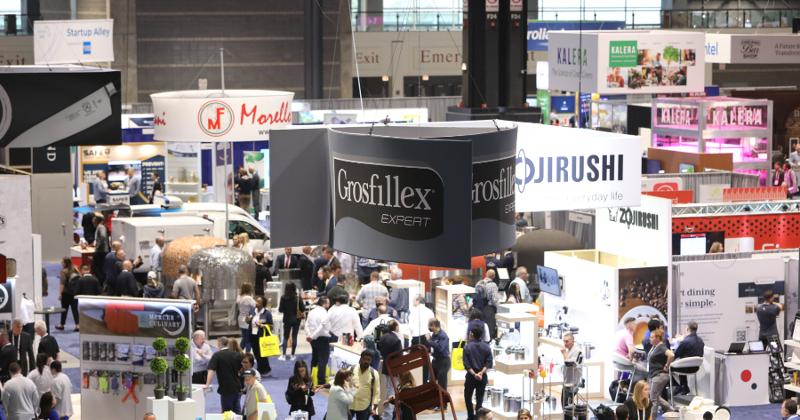 A view of the Show floor on Saturday. / Photograph: Oscar & Associates

If the National Restaurant Association Show is the industry’s Disney World, then the Tech Pavilion is its Tommorowland—a glimpse at what’s coming down the pike, but is still far enough away to marvel at before moving on.

This year feels different. In the three years since the industry last convened for its biggest annual gathering, restaurants have been to hell and back again. They’ve arrived in Chicago with a whole new set of problems, headlined by rising costs, supply chain snarls and staffing shortages. That has translated into a fresh sense of urgency in the tech aisles.

The vibe shift (if I may) was not lost on Bryan Solar, head of restaurants at e-commerce provider Square. In prior years, the Tech Pavilion “almost felt like a place people would go to visit,” he said—a menagerie of futuristic gizmos and gadgets. This year, “they’re coming here with real pain.”

When the pandemic struck in 2020, restaurants turned to technology as a means of survival. Products supporting online ordering, delivery and pickup took off. Makes sense, because they were in some cases the only way for operators to get sales. Now, sales are back, but margins are taking a hit because of the rising cost of labor and food. Once again, restaurants are looking to technology for help.

Show attendees roaming the floor will still find a seemingly bottomless sea of POS providers and digital menu solutions. But there’s also a noticeable increase in tech aimed at easing restaurants’ most pressing challenges. The most visible is robots, whose presence at the Show no longer feels like a novelty.

Bear Robotics, a maker of food-running robots, is ramping up partnerships with big chains like Denny’s and Chili’s. Another partner, Hwy 55, is planning the layout of its new restaurants with Bear’s robots in mind, a sales rep told me. Demand over the past year has been “chaotic,” he said, noting the bots’ workhorse nature and minimal impact on the bottom line: The tireless automatons cost about $2 an hour.

(Another benefit of bots, as one tech executive pointed out to me recently: They can be filed under capex, eliminating the cost from public companies’ all-important EBITDA, or earnings before interest, taxes, depreciation and amortization.)

A spin through the Show’s Startup Alley, home to companies that are 3 years old or less, only reinforced the sense that restaurant tech is shifting its attention to the bottom line.

A company called Sauce, for instance, offers a dynamic pricing tool that automatically adjusts menu prices throughout the day based on demand and other factors. The goal is to boost both sales and profits on those costly third-party delivery orders.

Another startup, ClearCOGs, aims to help restaurants control costs by letting them know how much of a given product to prep based on past demand. Its software ingests POS data and spits out a daily email with instructions like “this is how many tomatoes you need to slice,” said co-founder Osayanmo Osarenkhoe.

Launched in January, it’s now in use at two chains encompassing 65 locations. “Demand has not been the issue,” Osarenkhoe said.

Attendees from Nandos Peri Peri’s United Kingdom business served as a good example of restaurants’ changing priorities. During the pandemic, the fast-casual chicken chain popular in the UK built its own online ordering system to meet the increased demand for to-go, which now accounts for 30% of its sales. But at this year’s Show, Head of Technology Solutions Reg Meyer was browsing the Tech Pavilion for products that will help optimize the back of Nando’s restaurants. Automated forecasting software was one item on his shopping list.

As for Square, it, too, is responding to restaurants’ requests for help on the bottom line. It is rolling out mobile ordering and payment devices for servers that are designed to increase check sizes and speed table turns.

“Tech keeps being put in these spots where we have to evolve rapidly,” Solar said. The mobile devices are part of what he called a “quadrupling down” on the company’s restaurant business.

“We’re being asked to grow with our restaurants,” Solar said. “They need more stuff.”

Members help make our journalism possible. Become a Restaurant Business member today and unlock exclusive benefits, including unlimited access to all of our content. Sign up here.