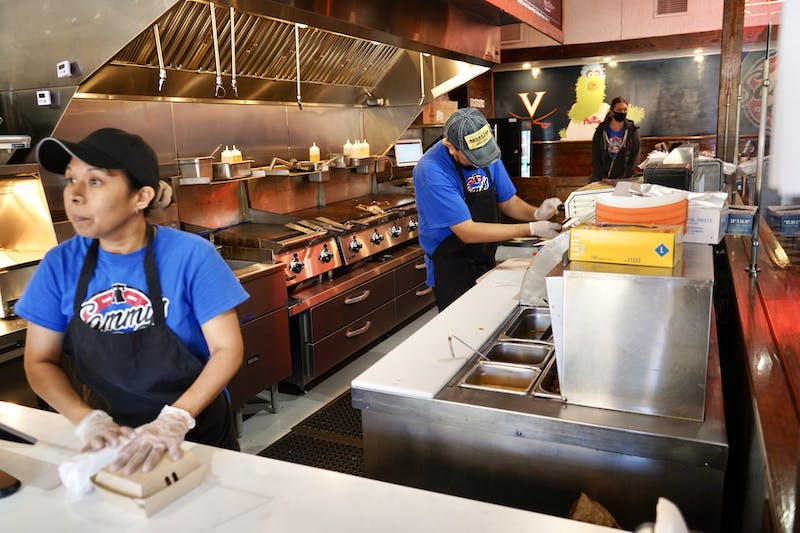 Following the closure of Littlejohn’s Delicatessen due to the pandemic, new restaurant Sammy’s On The Corner took up its space on Oct. 5 to serve an array of Philadelphia-inspired dishes to locals.

Sam Rochester, co-owner of Sammy’s on the Corner, has used his years of culinary expertise and Philadelphia upbringing to establish what he believes will be the next Corner staple.

The building was constructed 40 years ago, so moving Sammy’s into the space required extensive renovations. Rochester explained that he and his co-owner, Kevin McConnell, encountered multiple challenges throughout the renovation process.

“A lot of times when we took down walls, there were five or 10 things we had to fix behind the wall,” Rochester said. “There was a lot of extra work.”

The restaurant draws heavily from Rochester’s upbringing in Philadelphia — a focal point not only in the cheesesteaks themselves but also in the decorations lining the restaurant’s walls, which flaunt Philadelphia sports memorabilia and paintings of the city’s most famous landmarks.

Rochester stayed in Philadelphia until the age of 21 and lived a few blocks down from famous cheesesteak shops like Jim’s and Ishkabibble’s, the tastes of which he tried to incorporate into the cheesesteaks served at Sammy’s.

First-year Nursing student Caroline Miller explained why she visited Sammy’s and offered a review of the shop’s cheesesteaks. Coming from just outside Philadelphia, she argued they tasted pretty similar.

“I came because I noticed a bit ago [Sammy’s] was open, so I thought it’d be cool to try the cheesesteak,” Miller said. “It tastes like the ones in Philly.”

After leaving Philadelphia, Rochester moved to Colorado before relocating to Charlottesville, where he worked at restaurants like Mono Loco — a popular Spanish restaurant on Water Street that has since closed down. Rochester then became the executive chef of The Downtown Grille for eight years before becoming the executive chef of the Darden School of Business. Additionally, Rochester served as food and beverage director of Darden and worked at Observatory Hill Dining Hall before beginning his venture to create Sammy’s.

Now fully renovated, Sammy’s is currently operating from 10:30 a.m. to 8 p.m. Monday through Saturday but is hoping to begin late-night operation. Late-night hours for Sammy’s would drastically change the late-night food scene on the Corner, which is currently dominated by Christian’s Pizza and The White Spot.

“We are working towards going late-night Thursday, Friday and Saturday,” Rochester said. “We need to get there — the students need it.”

“That would really change things up if Sammy’s did late-night,” Simpson said. “The lines at the other food places are always insane … and there’s not many food options. It would really make things a lot easier for students who need food late at night.”

Sammy’s is planning to have its first late-night hours for Saturday’s football game against Notre Dame. The restaurant will also receive its liquor license soon, which will allow it to turn the upstairs patio into a bar targeted towards fourth-year students. Rochester explained he also hopes to start selling alcohol in the bottom floor area with special deals like Tequila Tuesdays.

After gaining years of culinary experience in Charlottesville, Rochester is finally creating a place of his own, bringing an authentic Philadelphia eating experience to his new hometown.

“We’re creating a different environment than anything that’s on the Corner,” Rochester said. “We’ve got a little bit of Philly attitude but a lot more of Charlottesville hospitality kind of blended in — the whole idea is to bring Philadelphia to Charlottesville.”

The local delicatessen Littlejohn’s closed down due to losses during the pandemic, then attempted to prevent shutting down by starting a fundraising page in July 2020. The GoFundMe raised $27,710, promising to provide its future employees a living wage and health insurance should it reopen.

Jaison Burke, former co-owner of Littlejohn’s, explained in September 2020 that the group failed to raise enough funds to support reopening in the same location on the Corner. In addition, he described other difficulties the ownership team was facing.

“We have come to the conclusion that we are not going to be able to raise enough funds to continue with our plans to reopen Littlejohn’s. Instead the team is changing focus to another space. After the tragic passing of a key member we just don’t have the ability, funds or manpower to operate that scale operation,” Burke’s post reads in a GoFundMe update.

All donors were offered a full refund and any donations that were not refunded were put towards creating a new, smaller, and more manageable space for Littlejohn’s.

Class of 2021 Nursing alumna Morgan Simpson remembered the effect Littlejohn’s had on the Corner. Having been on the corner for more than 40 years, the loss of Littlejohn’s is a big change for Charlottesville.

“It was a nice little shop,” Simpson said. “It’s sad they closed down because of COVID. I know some people really liked it.”

Having lived in Charlottesville for the past 15 years, Rochester understands the legacy of Littlejohn’s, affirming the roots of the old restaurant are still present in Sammy’s.