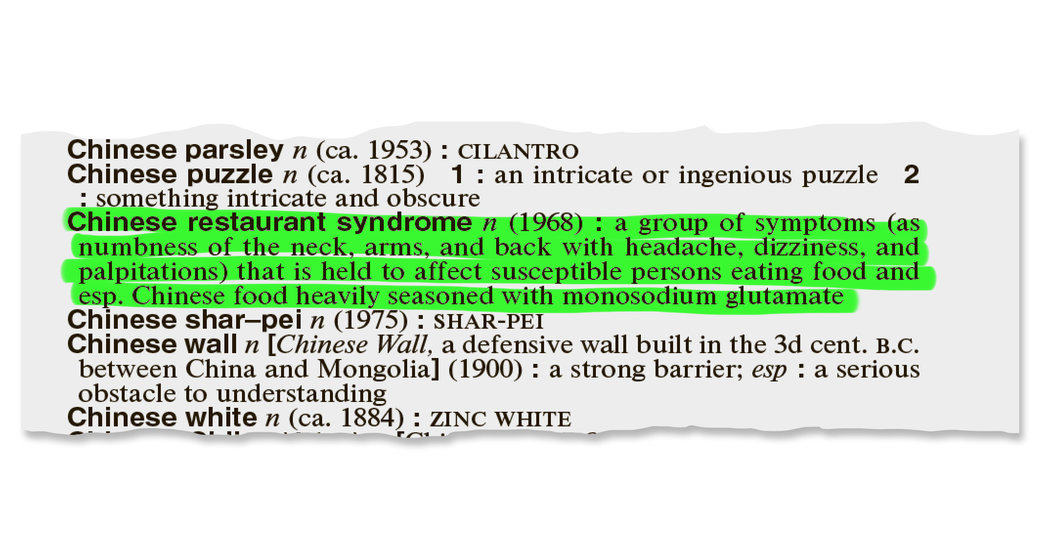 The entry came decades after a physician, Robert Ho Man Kwok, wrote The New England Journal of Medicine to describe an unusual malady. Whenever he ate at a Chinese restaurant, he said, he felt a peculiar numbness.

At first, his letter drew little attention. But six weeks later, the Journal published 10 more, including seven from physicians, describing similar symptoms: numbness, headaches and palpitations after eating Chinese food. The doctors speculated that the cause was a preservative — monosodium glutamate, or MSG.

On Tuesday, activists took to social media to persuade Merriam-Webster to update the entry. The #RedefineCRS campaign was conceived by Ajinomoto, a Japanese company that developed and has been the leading producer of MSG worldwide since 1909.

“We felt it was important to highlight the outdated definition of Chinese Restaurant Syndrome in light of the extensive human research proving MSG is not linked to such symptoms in food,” Tia Rains, the senior director of public relations for Ajinomoto, said in an email.

After the syndrome was described in the ’60s, food companies were quick to label the preservative, which adds umami flavor to a dish, as a toxin. Chinese restaurants began displaying signs: “No MSG.” It was removed from baby food. A generation of American eaters grew up thinking MSG was dirty, or dangerous.

But several studies have concluded that MSG isn’t necessarily bad for you. (And it’s not even specific to Chinese food — it’s added to ranch dressing, ramen and McDonald’s upcoming fried chicken sandwich. Glutamic acid itself occurs naturally in some tomatoes, mushrooms and cheese.) Some doctors think the reported symptoms might be caused by sodium; others wonder if it’s just confirmation bias.

Ajinomoto approached Eddie Huang, the restaurateur and comedian, and Jeannie Mai, a television personality, to lead the #RedefineCRS campaign, in the hope that they can change social perceptions about their product.

“I was shocked that Chinese Restaurant Syndrome was an actual term in a dictionary,” Mr. Huang, whose autobiography was adapted for a sitcom, “Fresh Off the Boat,” wrote in an email. (The actors are being paid, a spokeswoman for the company said, but she would not disclose how much. Nor would Mr. Huang and Ms. Mai.)

They are targeting a receptive publication. Merriam-Webster, the oldest dictionary publisher in the country, has recently earned a progressive reputation.

Its 2019 word of the year was “they”: a singular gender-neutral pronoun for transgender and nonbinary people. And, since at least the 2016 election, its Twitter account has had word-nerds cackling at passive-aggressive posts defining words that have been used incorrectly by politicians.

“We record the language — we do not create, sanction or promote any specific words; the language’s speakers do this, and we provide a record of this use,” Emily Brewster, a senior editor at Merriam-Webster, said in an email.

Ms. Brewster said that the publisher had no record of anyone contacting the company about the term until Tuesday morning, and that Merriam-Webster was “grateful” for the heads-up.

The stigma around MSG fueled — or, perhaps, was fueled by — long-held racist stereotypes.

After the United States lifted race-based immigration quotas in 1965, many Chinese immigrants, fleeing the Cultural Revolution that began in 1966, settled in the United States and opened restaurants. Many of those used MSG.

“We eat Chinese food three times a day all year, and we never have headaches or numbness or anything else,” Roy K.C. Chen, the owner of the Mandarin Inn in Manhattan’s Chinatown, said in a 1968 New York Times article about the controversy.

Even now, MSG is shunned in some circles. Lucky Lee’s, a Chinese-inspired restaurant opened in April by a white health coach in Manhattan, advertised a “clean” version of the cuisine, which would not be made with MSG and some other ingredients. That brought an outcry from people who felt she had appropriated and demeaned Chinese cuisine; the restaurant closed in December.

“As soon as I heard the actual definition for Chinese Restaurant Syndrome, it hurt because I know it’s steeped in decades of xenophobia,” Ms. Mai, who has a Vietnamese background, wrote in an email.

The #RedefineCRS campaign comes at a time when the country is grappling with relics of historic prejudice. Monuments to soldiers who fought for the Confederate Army in Civil War are being removed, reconsidered and challenged with adjacent art pieces across the country. Some local governments have banned — and some are fighting to reinstate — sports mascots or names reminiscent of stereotypes about Native Americans.

There is a long history of anti-Chinese policies in the United States. President Chester A. Arthur signed the Chinese Exclusion Act in 1882, arguably the first anti-immigrant law directed at a specific nationality. It was not revoked until 1943, after the two countries were allies in World War II.

Merriam-Webster deletes an entry only when the term is no longer in use, Ms. Brewster said. (It removed “air tourist,” which once referred to non-first-class airline travelers, and consolidated “threepenny bit” and “threepenny piece” into a single entry.) It labels slurs as “offensive” or “obscene” within the definition, documenting the historical past and cultural function.

“Were we to ignore certain words on the grounds that they are offensive, we would be negligent in our duty as lexicographers,” Ms. Brewster said in her email.

“That said,” she continued, “we certainly aim to be mindful of the inevitable shifts in language, and we regularly update both definitions and usage labels to reflect changes.”

Even as such artifacts of stereotypes and oppression are unearthed and recast, questions remain about how to address a problematic history. Some activists believe they should be removed without a trace, while others worry that that approach can cause cultural amnesia. Some believe in adding updates or challenges to the item to live alongside it, while others think that carries a racist past forward.

In the case of Chinese restaurant syndrome, the activists hope Merriam-Webster will seek a thoughtful reconsideration, turning the phrase into a fragment of a different time.

“I don’t think it should be simply removed,” Ms. Mai wrote. “There’s a lot of history and education that needs to be done around MSG and Chinese Restaurant Syndrome, so I hope redefining the term accomplishes that.”