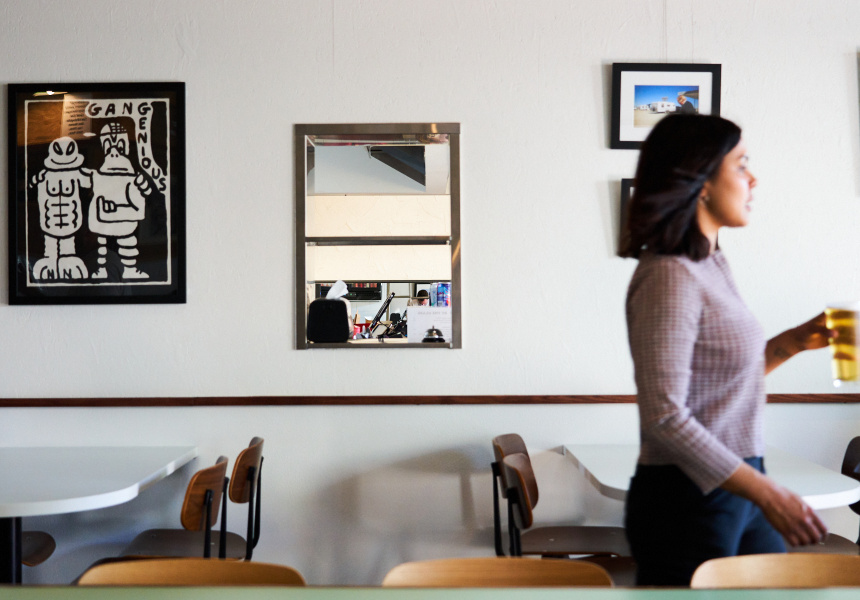 “We’re not really trying to be a wine bar,” says Hoodburger co-founder Matt Shaw about Hoodburger 848, the new licensed add-on to the Inglewood restaurant he and his brother Tom opened in 2019. I’m not convinced.

Admittedly, Hoodburger’s new bar expansion (the Shaw brothers took over the hairdresser next door to the restaurant earlier this year) doesn’t scream “wine bar” initially. As far as first impressions go, the space looks more canteen than enoteca. But once your eyes have adjusted to the space – and you’ve bagsed a table and chair for your visit – cool little details emerge. The beautiful, framed art and photos on the wall. The warm exposed brick and white wall aesthetic. The friendly patter of likeable staff who are happy to talk booze with, rather than at, guests. And then you notice the well-stocked fridge, filled with colourful labels drawn primarily from the lo-fi wine camp, although more traditionally made wines can also be found.

Nonetheless, while some – including your correspondent – are going to treat Hoodburger 848 as a place to primarily drink wine, Shaw just wants it to be a comfortable place for everyone to enjoy.

“The response that we’ve had from a lot of people is that it’s just a very inviting, relaxed atmosphere, which is what we’ve gone for,” says Shaw. “A lot of people can get a little bit put off with stereotypical wine bars. There is a focus on wine, but we’ve also got great local beers and random whiskies and spirits we like.”

The other point of difference, naturally, is the ability to enjoy said drinks with Hoodburger’s suite of burgers and sandwiches, similar to the arrangement between Flipside and neighbouring bars Mrs Brown and Albert’s. While diners need to order food from the restaurant, staff will pass it to the bar expansion via a neat serving window that’s been installed between the two spaces. (The idea, says Shaw, came from a dive bar in Toronto that allowed burgers from a neighbouring A&W to be delivered to eaters).

A small selection of cheese and meat plates and dips has also been added to the restaurant menu to cater for the new bar. Although the expansion has been designed to allow Hoodburger customers to enjoy an alcoholic drink with their food, guests are also free to drink in the bar without ordering food.