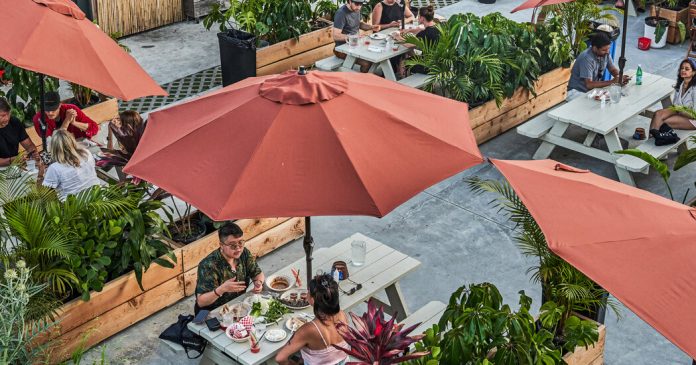 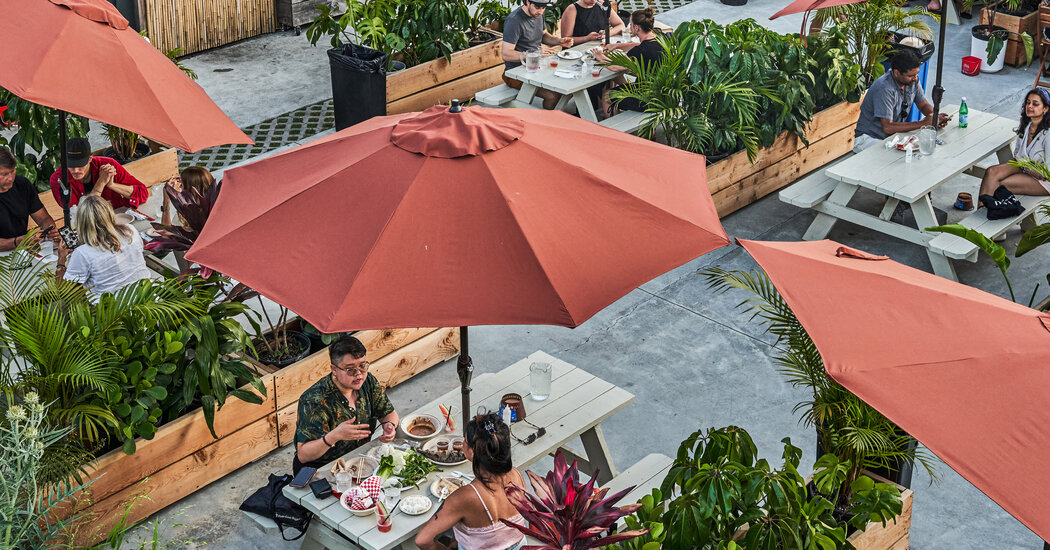 It is the summer of needing to come indoors to use the bathroom after two or three brightly colored cocktails and feeling mildly awkward, the way you did when you were a kid at a pool party in the backyard of people you didn’t know very well. It is the summer of chefs doing pop-ups and collaborations and career resets, the summer of cooks who once worked in famous kitchens sweating over blazing fires that can’t actually be legal in New York City, can they?

When you find all these things in a single setting together with fresh, smoke-steeped food that you instantly want to eat with your hands, as you do at a profusely landscaped dining pavilion in Brooklyn called Outerspace, you may start to suspect that you’ve stumbled across the restaurant of the summer.

Outerspace opened during the first year of the pandemic, in July of 2020, in an area of East Williamsburg where ruins of the factory era loom over young Brooklynites on their way to a drink in a meadery or dance in a Quonset hut. It lies behind an event space called 99 Scott at what appears to be the dead end of Scott Avenue but is merely an impasse; the street’s potholes and askew sidewalks continue on the other side of the freight train tracks of the Bushwick Branch. In the lot next to Outerspace is a company that rents scissor lifts, forklifts and other equipment for reaching spots high off the ground. When these machines are lined up with their long necks in the air, they resemble metal Brontosauruses, and Outerspace can feel like the picnic area of some postindustrial Jurassic Park.

The outdoor kitchen, an open shed with a corrugated sheet-metal roof and rolls of bamboo fencing tacked to the front, was in the hands of a former cook from Blanca and a former cook from Cosme last year. They served things like burrata with stone fruit, grilled corn with cashew butter and sourdough pizza topped with squash blossoms.

This year, on Memorial Day weekend, the stoves were turned over to Anthony Ha, Sadie Mae Burns and Chinchakriya Un. Working under the name Ha’s Dac Biet, Mr. Ha and Ms. Burns have been operating a floating Vietnamese kitchen that started out at bars around Brooklyn and eventually took over actual restaurants, culminating this spring in a residency at Frenchette on nights it was closed. Ms. Un has a long-running pop-up of her own, Kreung, where she recaptures the flavors of the life she might have had in Cambodia if the brutality of the Khmer Rouge had not made her family refugees before she was born.

The three chefs pool their two cuisines on one menu that hangs together seamlessly and rarely hints at who’s cooking what, valuing regional similarities over national differences. An exception is the salad Dac Biet, a bowl full of crisp raw summer vegetables tossed with all the flavorings a good Vietnamese salad wants and needs: salty fish sauce, lime juice, chopped peanuts, treacherous red wheels of bird’s-eye chiles, and shallots — raw and fried. What makes each new bite different, though, is a fistful of fresh dill, mint, purple-stemmed basil and other herbs. Like all the best summer dishes, it cools as it stimulates.

Herbs are half the success of the grilled fish, too. Sprigs of them are splayed out in a table salad with which you construct herbed and sauced bites of fish wrapped in lettuce or the soft sheets of matted rice noodles called banh hoi. These are not any herb sprigs. They are essential flavorings of Southeast Asian cooking — shared by Vietnam and Cambodia — including spears of rau ram, lemon balm and heartleaf, whose entwined flavors are suggested by its alternate name, fish mint. They do not turn up often enough in New York restaurants, or even New York markets; in a phone call, the chefs said they buy from an extensive web of farms and purveyors.

The tropical plants, the patio umbrellas, the open sky and thorough informality make Outerspace what may be the most Californian restaurant in New York. Adding to the effect is the wood smoke that burrows through the cooking. You get it in the Southeast Asian take on elotes, grilled cobs of corn spread with coconut cream. It’s there in the oysters cooked over the flames and finished with a trickle of scallion oil, and in the exquisitely well-roasted chicken served with jus that tastes of pickled chiles and lime leaves.

Of all the mixed drinks I tasted, and it’s possible I lost count, the only one that comes close to having the bright clarity of the food is the one that doesn’t come in a plastic cup: the coconut mojito. It isn’t anything like a mojito, but it is served in a coconut.

Nearly all the beers would make a more sympathetic partner, or any of the wines that were chosen for this menu by Jorge Riera, the Johnny Appleseed of natural-wine lists. Moonlighting from his job at Frenchette, Mr. Riera has brought in bottles from Gut Oggau, Christian Tschida, Frank Cornelissen and other proponents of leaving grapes and yeast to their own devices.

The current iteration of Outerspace is scheduled to close on Labor Day weekend. For years it’s been New York Times custom to give a new restaurant eight weeks or more to get up on its feet before giving it a starred review. The star system is still on a pandemic-induced hiatus, though, and I’m taking advantage of that to review Outerspace sooner than usual. Last year, with the help of fire pits and propane heaters the restaurant stayed open into December. It’s one of the few events of 2020 that I’d like to see repeated.

What the Stars Mean Because of the pandemic, restaurants are not being given star ratings.