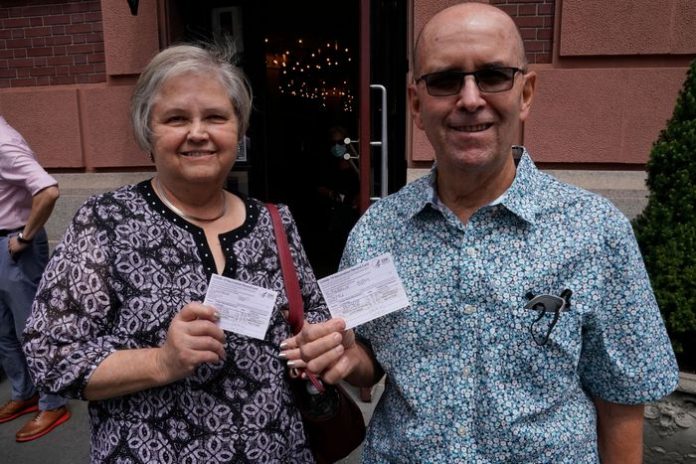 This was inevitable. On the day that New York City began to mandate COVID-19 vaccinations for anyone working or dining inside of the five boroughs’ restaurants, business owners began to take hardline stances against the measure. One Staten Island restaurateur told the BBC, “This could destroy my business … There are too many people who are unvaccinated,” while another questions his business’s ability to even enforce the rule. Both operators, the BBC reports, have joined a lawsuit against the city that attempts to block the mandate.

Meanwhile — as the vast majority of restaurants get onboard with ensuring the collective well-being of their workers, customers, and neighbors — other owners are using the mandate as a platform for publicity, loudly proclaiming plans to oppose the basic safety precaution. A pastry shop owner in Bay Ridge, for example, “is ignoring the rules not for ‘political’ reasons, but to uphold ‘civil liberties and freedoms,’” Business Insider reports. That same owner also tells the Daily Mail that the new policy is discriminatory, while posing for a photo in front of a giant sign plastered on her business’s window that proclaims “WE DO NOT DISCRIMINATE Against ANY Customer Based On SEX, GENDER, RACE, CREED, AGE, VACCINATED OR UNVACCINATED.” (It probably goes without saying that the gesture, for the time being, is entirely empty since the city will not actually begin issuing fines for noncompliance until September 13.)

Restaurant owners have a long history of opposing various regulations and taking assorted stands, often in the service of a higher calling, which is self-promotion. Say some crazy shit to the right reporter, and your restaurant could end up in the news, like the California operator who scored a prime-time interview on CNN after announcing his restaurant would only serve unvaccinated customers. (California reported almost 11,000 new coronavirus infections yesterday.)

The COVID-19 pandemic has provided ample opportunity for resistant restaurateurs to rail against both scientific evidence and sensible judgement, defying mask orders, downplaying or hiding coronavirus infections among employees, and forcing workers into unsafe environments. These actions, the argument always goes, are not about opposition to the vaccine or money; they’re about an unflappable devotion to freedom, and taking a stance against telling customers “what they should and shouldn’t do.”

The other argument against the mandate is that enforcement should not be the responsibility of restaurant workers, despite the fact that the enforcement in question is almost comically simple: A host, or bartender, or server simply looks at a piece of paper or the screen of a diner’s phone. It takes less time than verifying a table reservation. How long did it take you to look at the photo of the kind-looking, card-carrying couple at the top of this page? Like two-thirds of a second? That’s how long it would take to see their vaccination cards IRL, too. The first time I walked into a business that mandated vaccines for its customers, the longest part of the entire check-in process was the 35 seconds it took my phone to download a necessary Excelsior Pass update from the App Store.

The government’s initial response to the pandemic has certainly given all restaurateurs reason to be skeptical of local and federal officials, and perhaps some do not like the idea of being dangled as a carrot to incentivize vaccination among hesitant-but-nevertheless-hungry members of the public. Yet any arguments against the actual effort to ensure people dining indoors have received at least one vaccination shot — a program that, of course, does not force anyone to do anything — fall apart under even the slightest bit of scrutiny.

If you are a restaurant owner who fears that this vaccination mandate will negatively affect your business, perhaps your anger should be pointed at the adults who insist on ignoring the overwhelming body of evidence in support of vaccination and who, as a result, now won’t legally be able to give you money in exchange for eating food inside of your business. Maybe you should let them know that there is no downside to vaccination, only the possibility that a series of free, fast, and readily available shots will help to control a virus that, on average, is still killing 700 Americans each day.

New York City’s get-a-vaccine-if-you-want-to-go-to-the-gym-or-eat-inside-a-restaurant mandate is based on logic: If more people get vaccinated, we’ll all be safer. The alternative to logic, as is so often the case, is Florida. The continued efforts by officials there to politicize and undermine vaccination efforts has led the Sunshine State into what is by far the darkest stretch yet for its own infection rate, recording an average of more than 24,000 new cases per day. (At its peak last winter, New York State recorded an average of 16,600 cases per day; this was before a vaccine became widely available to the public.) As the Tampa Bay Times reports, Florida “now has one out of every five infections, hospitalizations and deaths in the U.S. as the delta variant runs rampant,” despite the fact that preventative vaccines are, to reiterate, readily available, completely free, and require just minutes to administer. The current infection spike is an unforced error of unimaginable magnitude.

But the same resistance to common sense that has led states like Florida into a(nother) summer of disease is now all too predictably playing out at restaurants, too. Whether these owners continue to stand firm once there’s real money on the line and fines — $1,000 for the first offense, and rising from there — begin to materialize remains to be seen, but for now, open defiance is, at best, a curious strategy for attracting business. It’s extremely difficult for customers to dine at your restaurant if they’re all in the hospital instead.