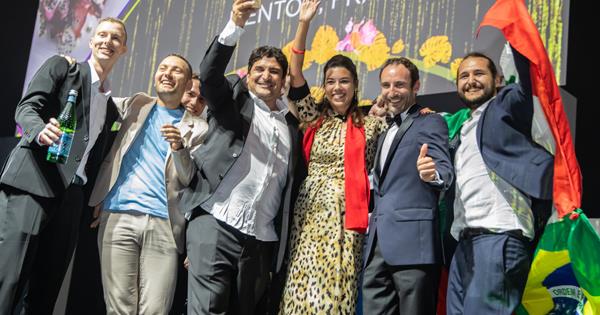 French restaurant Mirazur, led by Argentinian-born chef Mauro Colagreco, has clinched the top spot on The World’s 50 Best Restaurants list for 2019.
The accolade was announced in Singapore last night at the annual international awards ceremony, which also saw René Redzepi’s re-launched Noma (who sent their co-owner and dishwasher, Ali Sonko, to represent the restaurant) and Asador Etxebarri in Spain round out the top 3 list.
Mirazur, which already has three Michelin stars under its belt, marks the first time that France has ranked first since The World’s 50 Best Restaurants began in 2002.
Colagreco has called the award “a great honour”. “It recognises the trajectory of my life from Argentina to the Riviera that welcomed me so warmly 19 years ago. I am overjoyed to bring this award back to France,” he said in a statement. “I am from so many influences but above everything, I am a cook and I love to cook. My food is just from my heart, and I love to share it with my guests. From all of us at Mirazur, thank you.”
Colagreco moved to France in his 20s, working with a string of celebrated French chefs including Alain Passard, Alain Ducasse and the late Bernard Loiseau. In 2006, he opened Mirazur in Menton near the French-Italian border, serving envelope-pushing food that takes inspiration from his Italian-Argentinian heritage, the mountains and waters of the French Riviera, and produce picked from restaurant’s own garden located just 300 metres away.
Mirazur débuted on the list at number 35 in 2009, and has steadily risen through the ranks over the years. In 2018, it ranked third on the list behind Massimo Bottura’s Osteria Francescana in Italy (number 1) and Spain’s El Celler de Can Roca (number 2).
Over the years, the awards have faced criticism for a lack of diversity in its rankings, which skewed heavily towards European restaurants, and kitchens led by male chefs. This year’s list still includes 28 restaurants from Europe, as well as eight from Central and South America, seven from Asia, six from the USA and one from Africa.
Five restaurants in the top 50 are run by women, with Central in Peru (number 6) jointly led by chefs Virgilio Martínez and Pía León. The contentious “world’s best female chef” award still remains, with this year’s accolade going to Daniela Soto-Innes of New York restaurants Atla and Cosme.
Notably, no Australian restaurants made the shortlist. Attica slipped from its all-time high of number 20 to land at number 84 on the longlist, and Brae dropped from last year’s 58th place to 101st. (This year the longlist expanded from 100 entries to 120.) Despite speculation, Sydney’s Quay failed to crack the top 50. Peter Gilmore’s harbourside restaurant was last spotted at 98th spot in 2016 before a multimillion-dollar renovation last year. The Chairman in Hong Kong has débuted on the shortlist at number 41 – it’s run by Danny Yip, who previously owned a string of restaurants in Canberra including much-loved The Chairman & Yip.
The World’s 50 Best Restaurants 2019 full list

Inside Baby Luc’s, the Hottest Pizza Party on the Planet

Inside Baby Luc’s, the Hottest Pizza Party on the Planet