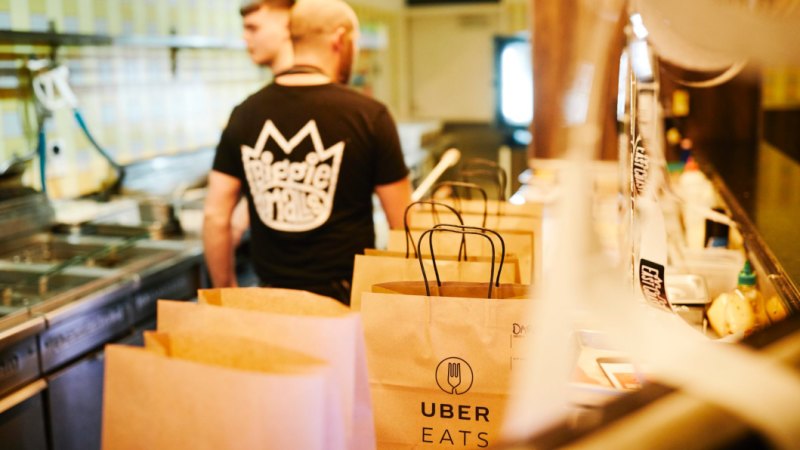 “Sometimes it is not just the physical assets, it is the ingredients,” she said.

Ms Auster gave the example of chicken wings selling well on Uber Eats for a restaurant, which would then create a separate chicken wing brand operating only as a virtual restaurant.

I am a really strong advocate of the virtual kitchen much less so of the dark kitchen.

“Same ingredients, same kitchen staff, but the perception for the consumer is they are getting a different choice,” she said. “It can actually be really powerful.”

Uber Eats has identified virtual restaurants as an avenue of growth in the highly competitive online food delivery market, which Deloitte valued at $1.3 billion for 2019 in its “Future of Food” report commissioned by Uber Eats.

Ms Auster said growth in new restaurants listing on Uber Eats, which launched in Australia in 2016, had flattened out.

“With any adoption curve it gets slower and harder to acquire those restaurants that have not used you yet,” she said.

“I am a really strong advocate of the virtual kitchen much less so of the dark kitchen and the reason is the volume is very spiky in food delivery,” she said. “It is peaky around lunch and dinner. It is hard to justify the fixed costs of a separate kitchen. We have amazing and pervasive food and kitchen infrastructure that already exists why wouldn’t you use it and make it more efficient.”

Uber Eats’ push for virtual kitchens appears to counter its claims the platform serves as an advertisement for restaurants to get customers into restaurants and cafes.

Hospitality consultant Ken Burgin said the reality was most operators did not know how to use the food delivery platforms as a cross promotional tool for their bricks and mortar businesses.

“If it’s sold under a different brand it’s purely a money-making exercise because nobody knows where the food is coming from,” he said.

Mr Burgin said he wasn’t sure whether customers were “too fussed” that the restaurants they were ordering from only existed virtually.

“I think having several brands under one umbrella is kind of clever,” he said. “The question is whether it adds to a total increase in sales. Virtual restaurants probably also attract those people who don’t want their brand to be associated with lukewarm food delivered in plastic boxes.”