Some restaurants are seeing the impact of rising concerns about the coronavirus in the Bay Area, citing canceled reservations, scrubbed private parties and overall slow nights.

In some cases, the restaurants are losing business because of the lack of tourism from China. Meanwhile, San Francisco Chinatown restaurants have seen the neighborhood’s streets empty out due to misplaced concerns and suspected xenophobia. Other restaurant owners aren’t sure exactly why business has dipped — but mounting fears around the coronavirus as cases emerge in Northern California could be the answer.

It’s “like being in biblical times here — fires, floods, plagues,” said Christopher Kostow, executive chef at the three Michelin-starred Restaurant at Meadowood in Napa Valley, which has seen a burst of cancellations because of the virus and had to briefly shut down during recent wildfires that hit Wine Country.

He said some cancellations stemmed from international tourists who opted out of their vacation plans, while others were domestic visitors newly nervous about coming to the Bay Area after San Francisco mayor London Breed declared a state of emergency.

“I understand why San Francisco did that, but it definitely sends a bit of a haunting message,” he said. “We’ll see how it plays out in the months to come.”

On Friday, a Bay Area tech company canceled a full buyout of Charter Oak, another one of Kostow’s Napa Valley restaurants. Local companies are pulling out of conferences en masse while some, like Facebook’s Global Marketing Summit, have been flat-out canceled.

That said, the impact on restaurants doesn’t seem to be widespread yet. The Chronicle reached out to more than 25 San Francisco restaurants outside of Chinatown this week to ask about the coronavirus and the majority did not report any noticeable change in business. A few declined to comment.

It can be difficult for a restaurant owner to tell why business slows, especially during an already-slow time of year, but large party cancellations stand out. Alexander Hong, the chef-owner of Cal-Italian spot Sorrel in Pacific Heights, said he recently had one 14-person party cancel, specifically citing the coronavirus.

French destination restaurant La Folie reported that a few guests canceled reservations because they were seniors already experiencing flu-like symptoms and nervous about going out.

While business has been strong at Paul Einbund’s San Francisco restaurants, the Morris and Gap Year at Nico, the restaurateur suspects the effects could be more drawn-out.

Kostow said management at Meadowood has begun discussing how to prepare for a pandemic. He has some experience in this, given he also has a restaurant, Ensue, in Shenzhen. Ensue has been closed since Lunar New Year because of the virus but will reopen next week. Many restaurants similarly shut down, while others changed formats.

“A lot of restaurants have moved to takeout because people are holed up in their apartments,” Kostow said. 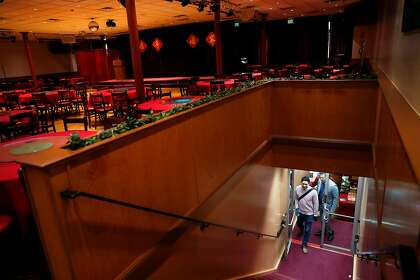 “The rumor is, ‘Better don’t go to Chinatown, you might catch the virus,’” said Bill Lee, the owner of Far East Cafe, one of the neighborhood’s last two remaining banquet hall restaurants.

To be clear, there are still no confirmed cases of coronavirus originating in San Francisco and there is no reason for anyone to think it would be in Chinatown — other than xenophobic associations because the virus started in China. This appears to be impacting Chinese restaurants across the country. According to Yelp, calls to Chinese restaurants, visits to Chinese restaurant websites and perusals of Chinese menus are down 20 percent since virus fears began to take hold this month.

Lee has told would-be diners not to believe the rumors, but the cancellations come anyway.

“I keep losing money,” he said. “If it keeps going, I think I might close down after the summer this year.”

Michelin-starred Mister Jiu’s, also located in Chinatown, has also been slow the past few days.

“I’m really, really reluctant to say it’s related to the coronavirus because we don’t know. I don’t want to feed into this panic,” said pastry chef Melissa Chou.