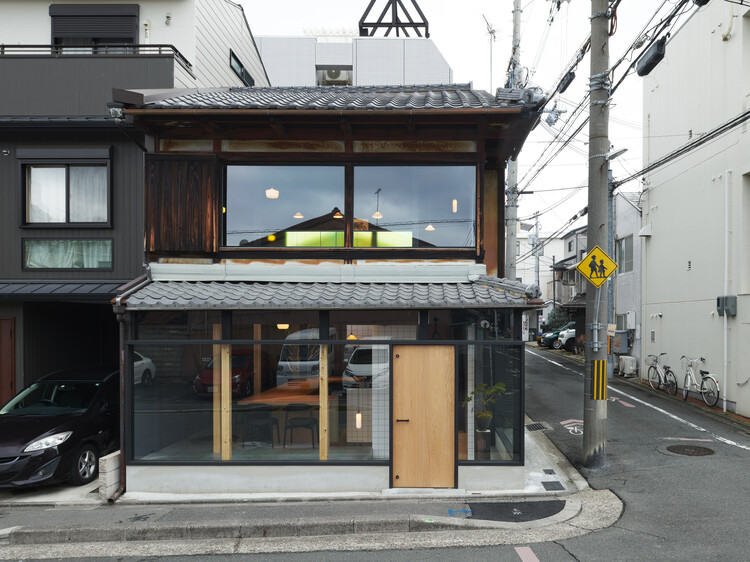 Text description provided by the architects. This project is an attempt to preserve as much as possible the memory of the space that was familiar to the residents of the neighborhood when the owner’s grandmother ran a restaurant, while creating an invisible line connecting the past and present, and reusing the “form” that has remained since that time.

The facade with large transparent glass is 30cm higher than the entrance, allowing the customer to feel the live atmosphere of the restaurant like a stage from the outside, while considering the visual approach from the exterior. We also created a tsuboniwa garden inside the building, which can be seen from inside and outside, to express the expanse of the building.

Among the multiple pendant lights in the restaurant, I mixed in one light that my grandmother used in those days, and randomly placed it to create a light effect. We also repainted the existing walls in a dark blue-gray color, which is not normally used in machiya, and used the same tiles for the kitchen walls and stairs. The kitchen wall tiles and stairs are also from that era, and the missing steps are made from existing beams that could not be used structurally to create a fresh and three-dimensional space while preserving the memories of that time.

The cutlery rest and the menu stand were also made by cutting out the existing beams, and we incorporated the memories of those days into the places that visitors touch. The coat hooks were made in the image of the vise that was found at the site during the site survey.

The restaurant’s trade name, “Komatsu,” was inherited from my grandmother’s “family name,” which would disappear in her generation. It is as if the owner has newly given life to the space, which is littered with the shapes and memories of the building from that time. I hope that locals and visitors from far and wide will enjoy their meal while feeling the background of the historical family of this place.