Tristan Rosier quietly opened Arthur in October 2018, and news has quickly spread of the 35-seat restaurant that only serves a set menu. After 15 years cooking at restaurants including Biota, est., Farmhouse Kings Cross and Dead Ringer, Rosier was ready to leave the security of a head chef role and go it alone.

However, Rosier is doing things differently — not just by forgoing a la carte — but breaking down the barriers between front and back of house, championing Australian produce and beverages and making a conscious effort to foster creativity in the kitchen. In other words, Rosier is part of a new generation of business owners who are just as interested in their staff as they are about the food on a plate.

It took two years before Rosier and his partner Rebecca Fanning locked in a site for Arthur. The pair were one day away from signing a lease on a site in Enmore, but had to pull the pin after the landlord failed to divulge crucial information. “There was some construction going on upstairs that would have delayed us getting approval to trade for about six months,” says Rosier. “We needed to take legal action against the landlord to get our deposit back.” Rosier and Fanning persevered and eventually found a venue in a heritage-listed building on Bourke Street, Surry Hills.

Leaving the safety net of being someone’s employee to open a business is a huge leap, no matter what industry you work in. Rosier spent years cooking dishes for other people, and while he learned a lot on the job — like how to cook — the lessons on what not to do stuck. “During the latter part of my career, I was in control of knowing how to cook but I was observing the mistakes chefs and business owners made and thinking about how to do things better,” he says. “Working in fine dining, you learn attention to detail and how to push yourself beyond your limits, but you’re also learning what not to do in terms of how to talk to people and handle complaints and how you treat your staff and suppliers.”

The core motivators for the launch of Arthur were two-fold: creative and financial. On the creative front, there are strict budgets and dealing with management, who have the final say on what makes the menu. “I was a head chef in a few restaurants, and no matter how much freedom they think they can relinquish or how much they say they want you to develop a menu for their restaurant, it’s their vision,” says Rosier. “After a while it becomes frustrating, and as a chef, in some scenarios you know better.” A similar notion applies to financial decisions. Rosier doesn’t have to worry about making a case to management to buy a new piece of equipment or spending extra dosh on ingredients. “I set my own targets,” he says. “If I want a piece of equipment, I go and buy it. But it’s more about creating a product I’m happy with.”

After working in small and large businesses for 15 years, it’s understandable to want a piece of the pie at some point. Rosier wanted to keep Arthur small so he could take a fair cut. “If I’m going to put in the hard work, I want the benefit,” he says. “I think small restaurants should have one or two owners. When you have multiple owners and have to employ chefs and managers, there’s not enough money to go around. Financially, it was a good decision.”

Most restaurants offer an a la carte menu alongside a banquet or tasting menu, but Rosier wanted to do something different, despite the naysayers. “There were a lot of people asking why we were doing a set menu, but working at Farmhouse for five years, I saw how well a set menu restaurant can run and function,” says Rosier.

The chef is quick to point out his 10-course set menu is far from a degustation and instead mimics a communal dining experience. “A degustation is usually highly priced, smaller portions, heaps of courses and you’re there for three to four hours,” says Rosier. “Our set menu has roughly 10 dishes, but we serve them two at a time. It’s like going to a restaurant with a couple of friends and ordering a few different dishes.” 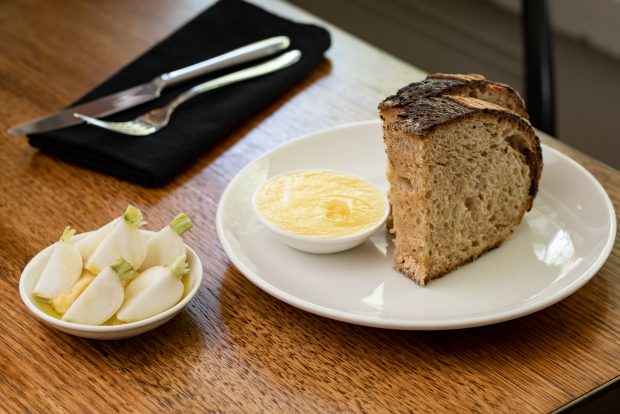 There are a number of benefits that come with offering a set menu: minimal waste, chef creativity and maximum productivity are a few motivators that spring to mind.
“Dead Ringer was such a fluid business and I used to get frustrated because you’d spend most of your day preparing food that might not be ordered and it’s soul destroying; it’s hard to put love into food that might not be ordered,” he says. “I wanted everything I prepared that day to be sold. It’s easier for ordering, you don’t waste anything and we can save certain ingredients for other dishes such as fish carcasses which we age and make stock from.”

The format has not only changed the way chefs prep food, but the method of service. There’s no docket printer in the kitchen and the design of the restaurant is completely open, removing the barriers between chefs and front of house. “We only have 10–11 staff members including me and we wanted it to be fluid where everyone helps,” says Rosier. “Sometimes the floor staff will help with food prep and chefs will do wine training. There’s a lot of cross-pollination and it allows staff to appreciate every job has less-desirable parts.”

Rosier was adamant chefs would run dishes to diners when he conceptualised Arthur, and says face-to-face interaction between chef and diner has been lost in many establishments. “For many years, I was cooking for a piece of paper on a docket rail,” he says. “That’s not why you should be cooking — you should be cooking for the customer. When you interact with them, you see their eyes light up and they ask questions; it’s a different currency.”

Rosier takes his role as a business owner seriously. The chef has a vested interest in developing the team around him and creating an environment that fosters creativity. “I want to be a mentor, teach people, get them excited about food and make them think on their own,” says Rosier. “The next generation will be better than mine because they had people like me who trained them to think openly and creatively.” 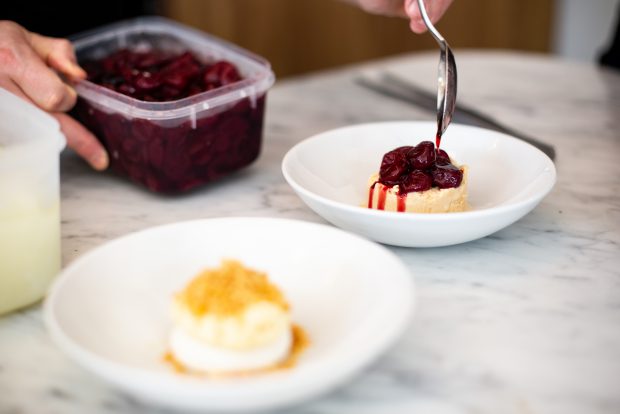 Arthur changes up the menu according to seasonality and appeasing regular customers, which benefits chefs and the dining public. “Chefs get bored of cooking the same dishes and after a while the quality slips a little bit,” says Rosier. “There’s the development stage where you create it and put it on the menu and you’re passionate about making every one perfect but then a few weeks later, you lose traction. I’m vigilant of watching the quality of the produce coming out and the dish comes off once the passion dies off. “If I change two dishes tomorrow, my chefs will be here an hour earlier because they’re excited to make it perfect.”

Rosier has food and service down-pat, but the business side of opening a restaurant took some getting used to. Throw in the fatigue of working seven days a week and pressure to launch a venue in Sydney and you’ve got yourself a hefty challenge. But the chef looks at his first six months
in business as a learning curve. “I spent 15 years learning how to cook, clean a kitchen and write a menu, but it’s patchy in the beginning when you’re trying to be creative and doing all the accounting stuff and making sure you have the right insurance. I wouldn’t change it, though.”

Arthur is still in the embryonic stages, but Rosier and his team are running a venue that’s backing up their claims. Sustainable? Yes. Collaborative? Yes. Changing the definition of modern Australian? Bloody oath.

This story originally appeared in the May issue of Hospitality. Subscribe now.