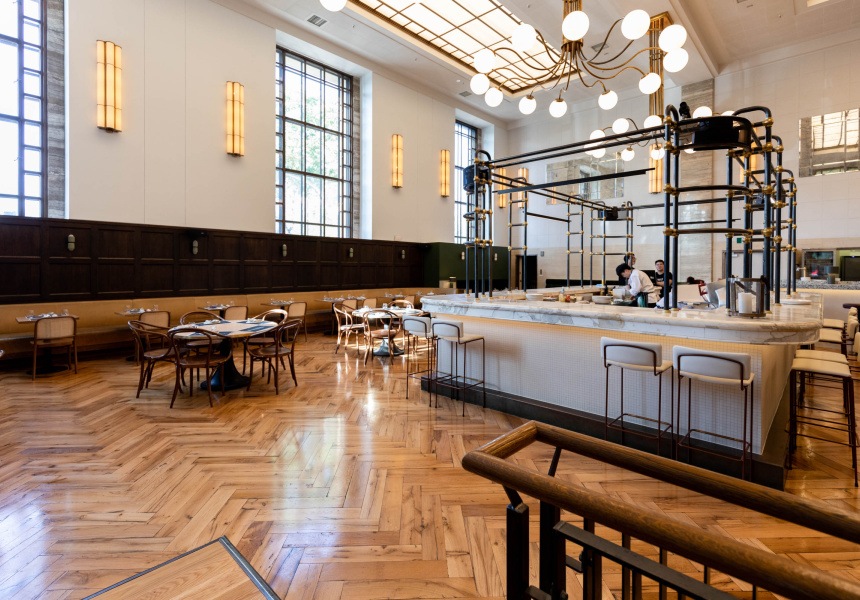 Angasi oysters were once harvested to the brink of extinction in Australia and are a rare sight on local menus. But, come tomorrow, you can order a dozen from Fishbank – a new restaurant opening in the old Jamie’s Italian space, a grand former bank building on King William Street.

“The angasi oyster was the original oyster from SA before we fished them all out,” Fishbank executive chef Tony Carroll tells Broadsheet. “And then the Pacific [oyster] came from Japan about 55 years ago. The angasi is making a bit of a comeback, with certain small growers reintroducing those native oysters to South Australia … they’re not quite as big yet, but as time goes by, they’ll get bigger and bigger.”

The blues and whites of the furniture and branding are a distinct change from the reds and browns of Jamie’s. The new look was a collaboration between architects and designers Mark Folland, Claire Kneebone, Mo Hardy and Ali Palmer. The 20th-century former Westpac building provides an old-school sense of glamour.

The ambitious new restaurant is the brainchild of Martin Palmer and Ed Peter, the partnership behind upstairs bar and restaurant 2KW. “There was the opportunity in town to have a great seafood restaurant, and we felt that this grand space really suited that type of concept,” says Palmer. “And the fact that there are so many different varieties of seafood that a lot of places aren’t really using. They tend to stick very much to the traditional types of local catches that are around. We’ve really expanded to bring in seafood all over Australia.”

The new restaurant has created 50 new jobs, including roles for 22 chefs. “Before Covid, there was a lot of… wage theft drama. People working super long hours,” says Carroll. “We talk about sustainable fish. But what about sustainable chefs, and sustainable industry? You can’t keep people working 60 hours a week and think they’re going to be cooking in 10 years’ time.” For that reason, separate teams have been hired for the morning and afternoon.

The menu spans everything from fish and chips to beluga caviar. Influences are varied – from French and Italian to Malaysian and Chinese. “There’s a bit of everything on this menu. Seafood’s global,” says Carroll. Smaller dishes include a pickled squid salad with black pudding and burnt apple; wok-fried pipis in an XO sauce; and crab remoulade with avocado, finger lime, chives and rye crackers. Larger options include Murray cod with Sichuan eggplant and Chinese black vinegar; panko-crumbed flathead kiev with garlic butter and mushy peas; and wok-fried mud crab in a chilli-coconut broth.

Carroll and the team are aiming to be zero-waste. But it can be tricky with seafood. “With fish, it’s quite hard. There’s not a lot of recovery on fish,” he says. “We do fish-head curry, try to use the livers up where we can; we have tails on the menu. We want to use every bit of the fish, for two reasons: it’s sustainable, but it’s bloody expensive as well … we want to use as much as we can, when we can.”

Fishbank will be open every morning for coffee and pastries from Uraidla Bakery, and stay open until late for meals and drinks. Even the cocktails are fish-themed – among them are Dorsal Gin (gin, bianco vermouth, fennel and citrus bitters), Now You Sashimi (vodka, wasabi, yuzu, mandarin) and Romp in the Sand (pisco, coconut, passionfruit, lime and seafoam.)